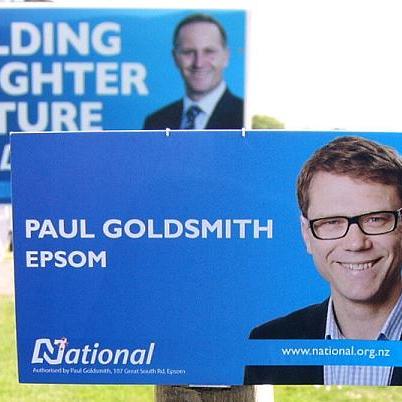 National has this cosy arrangement whereby it essentially gifts the seat of Epsom to its puppet party ACT. This then gives the right an extra vote in Parliament.  Basically Epsom gets two MPs for the price of one.

The worse ACT polls the greater the benefit of this arrangement.  And given current polling this is indeed a gift to the right.  If the principle is that each vote should be as valuable as every other vote then this arrangement should cease.  But National and ACT are rolling it out again in the hope that the playing field can be skewered in their favour, one more time.

The solution is simple although I know a few people who went through personal anguish at the thought last time.  All people have to do is vote Paul Goldsmith with their electorate vote.  They can then give their party vote to Labour or the Greens.  But if enough progressives vote Paul then ACT can be no more.

These are the results from the last election. Note how many Nats decided they should give Goldsmith their electorate vote and how Seymour’s majority (4,250) is less than the combined electorate votes achieved by Gender and Wood (6,491).

This time it is a smaller field.

With the lack of independents and the Conservative Party languishing I suspect that a lot of those votes will break against Seymour.  So ridding our Parliament of the ACT party is within progressives’ power.

What is required is for Epsom residents to go into the polling booth, get your voting paper, go to the solitude of the individual booth, extract your pen, look at the list, tick Labour or Green whatever is your preference, then look at the electorate candidate list and tick Paul Goldsmith.

Then leave, go to Church and confess, or go to a pub and have a shot of Whiskey, or go for a long walk, or go to City Mission and wash dishes, just go and do something.

Because you would have done something good for our country.  Even if you have exercised your democratic choice in favour of someone who frankly is quite weird and has a built in hatred of poor people.  He is no different to the other candidate.

Because by your sacrifice the prospects of a progressive Government will be increased.

I know how difficult this will be.  My whanau who live in the electorate confessed that they went into the polling booth with the intent of electorate voting Goldsmith but when it came to the crunch they could not do it.  I understood their pain.

But if we are to rid ourselves of this Government we all have to do what we can.  And the progressive electors in Epsom are in a special place.  Because if they vote Paul Goldsmith with their electorate vote then that abomination that is the ACT Party may be consigned to political history.