This is the face of the failure of globalisation 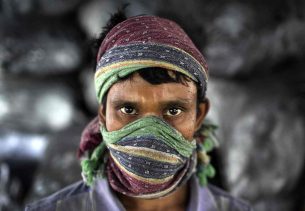 This man, Mohammad Jamal, like many others in proto-industrialised countries, is a support worker for the West.  He works in a, to Western eyes, make-shift aluminium processing plant. According to this photo essay in the Guardian, he last saw his 2 day old daughter four months ago and doesn’t know when he will see her next. He and his fellow workers travel far from home to work 12 hour days melting down aluminium cans, industrial ash, and medicine blister packs into raw aluminium. They work in dangerous conditions with minimal health protections. Please look at these images to understand.

This is what globalisation does. We in the West have the rhetoric that eventually free trade will lift Jamal out of his poverty, but I think what we really mean is that we want him working long hours in a better aluminium factory than the one he is in now. We think that if we just keep on with the Project that Jamal will get workers’ rights, a decent wage, and time with his family. But in the meantime, we are willing and happy to live off his sweat and blood. We also tell ourselves that if it weren’t for free trade then people in Jamal’s position would die. TINA is a fiction someone created that we now use to avoid facing our true responsibilities in the suffering of others.

I don’t know where the waste Jamal is processing comes from, but I do know that in NZ much of our recycling is shipped overseas to be processed in places where it is more ‘economic’ to do so. Because this is what the market dictates. It also dictates that most of us don’t have to look at what really happens to that plastic bag we threw out this morning, and who is going to be handling it in the end.

I also don’t know much about Bangladesh, or the region where Jamal lives. Google tells me that the river beside which the aluminium is processed ‘bleeds black’ from pollution. But history shows us that humans have lived good lives before industrialisation, and that the things that make life worth living aren’t cars and iPhones but instead are things like enough food and nutrition, good shelter, time for play, and the ability to have relationships with the people we care about. There is also the satisfaction of making a living, not measured by abstract global income rates, but by how well we can live as we ourselves determine that. To that end, I am one of the lefties who doesn’t believe in free trade, but who instead believes that wellbeing is at core dependent on self-determination. That’s the missing conversation.

I was going to try and write a post in which I didn’t mention climate change, but it is the elephant in the neoliberal living room. On a finite planet, with now increasingly limited time to reduce consumption, the idea that Jamal can join us in our standard of living is a blatant lie. There are definitely ways in which the lives of many many people can be improved, but some of us are going to have to surrender our privilege for that to happen.