This is what the climate crisis looks like in New Zealand, so far

Metservice and NIWA aren’t going to say this is climate change, because any of these floods and slips could have and have happened without AGW. But, the point here is that extreme weather events will get more extreme and more frequent. We already see this with the Buller region having now 4 major floods in a year. The climate crisis is on our doorstep, literally in the case of Nelson people this week.

A state of emergency remains in place for Nelson, Tasman and the West Coast: https://t.co/1kzcAI5r7C pic.twitter.com/Ph8n9qLtgt

Things that stand out. At the start of this particular atmospheric river, the forecast was for 56 hours of heavy rain for the upper West Coast from 9am Tues to 5pm Thurs. Two and a half days is a long time to be sitting waiting to see if you’re going to lose your home (again).

That’s in an area already saturated, and that’s had multiple serious floods since the pandemic started. There are now cumulative effects on people’s hearts, minds, bodies and homes. Fortunately for the Coast, they were spared the worst of the deluge, as the rainfall headed over the Nelson area instead.

As you look at these images, understand that more heavy rain is expected over the weekend.

Truly hellish scene in Atawhai, shared by someone on FB just now. pic.twitter.com/Q8CGTTnnWX 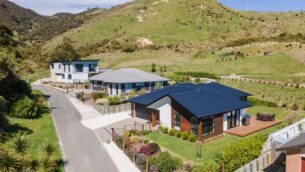 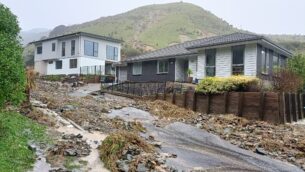 Hattip Joe90 for the before and after photos.

Stuff’s helicopter view video of the extent of the flooding in Nelson.

This RNZ video shows the spread of flooding in just one area. Of note here is how much vegetation is standing when tarmac isn’t, and the fact that shrub and tree ecosystems slow and spread water and thus limit damage. This looks exactly like flooding in the bush on the west side of the divide, and we should absolutely be learning from this in how we design suburban spaces.

This from this morning, 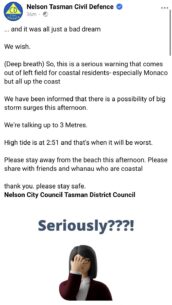 There are also flooding and slips in Wellington, Taranki, Gisborne and Northland. RNZ live updates here.

This twitter events feed is worth following to get a grasp of the breadth and complexity of what is happening.

While atmospheric rivers aren’t new and are in fact important aspects of our normal weather patterns, this one was acknowledged as being unusual,

“This current atmospheric river is pretty exceptional; it’s long lasting (> 3 days) and has a very anomalously large moisture content. Current forecast models indicate that this would be classified as an ‘extreme’ to ‘exceptional’ atmospheric river – indeed, an analysis we undertook indicates that the amount of moisture in the atmosphere for this particular event is unprecedented for August in climatological data going back to 1959. As a caveat – we’d need to go back and analyse this to confirm whether or not that shapes out to be true after the event.

Insurance companies are saying that change is coming to premiums and coverage. Insurance Council chief executive Tim Grafton on RNZ in July,

…there was no doubt climate had arrived with the cost of weather-related insured losses doubling in the last five year period.

Grafton said the focus for society now had to be on reducing, controlling and avoiding the risks posed by future extreme weather events.

Stopping developers building houses in “dumb places” such as flood plains would be necessary to avoid increasing these risks, he said.

Common sense. But also a signal that insurance companies will be looking hard at where houses are being built and how they will or won’t insure them. New Zealand has been largely ignoring what’s been happening on the West Coast, parts of which are now leading contenders for the need for managed retreat, but I suspect that the Nelson floods are waking people up to the fact that the climate crisis isn’t just some sea level rises some vague time off the in the future. It’s houses, our houses, in valleys and all the unwise places that developers have been allowed to build where nature will now take over again.

Two days ago on RNZ,

Properties worth $1 million on Wellington’s Petone foreshore could reach $100,000 a year to insure in 20 years, a climate risk expert says.

A treasury report citing research by Aon from September 2021 said 5 percent of New Zealand properties (nearly 90,000 homes) had risk that, if fully priced, would be mean their flood risk premiums would be 1 percent of the property’s value.

Auckland, Christchurch, Lower Hutt, Napier and Palmerston North cities were the most exposed to flood hazards in absolute terms. But per head of population Buller, Thames-Coromandel District, Wairoa, Central Otago and Gore districts were the worst affected.

No mention of Nelson. Would love to know what criteria they were using and if that will now change.

IAG has released a three-part plan to try speed up efforts to reduce flood risk from rivers.

It says there have been 10 major floods in Aotearoa in the past two years with insured losses of around $400 million. But the wider economic and social costs are into the billions.

We cannot say we were not warned.

The damage from this one event is mindboggling. But here’s the thing we haven’t got to grips with yet. Eventually we won’t have the financial, logistic, materials and labour capacity to keep repairing the damage.

If we keep doing what we are doing (not acting on climate), then at some point there will just be too many of these events to keep up with. Factor in international issues like oil supply, or collapse of the global food chain, and it’s not hard to see just how bad this could be.

Here’s the good news. It’s not too late for us to both mitigate (reduce the risk of runaway climate change that would collapse civilisation) and adapt (change how we design and run society so that we can take into account the changes happening in our environment). We can also reduce the ongoing cost to society of both of those if we act now.

Acting now means being willing to change, quite radically. All of us. The sooner we do this, the better chance we have of averting disaster.

Also good news is that systems thinking, sustainability, and whole system design are adept at solving these kinds of interwoven problems. We’re not there yet, but it is one of the choices available.

66 comments on “This is what the climate crisis looks like in New Zealand, so far ”