This is why we need a living wage 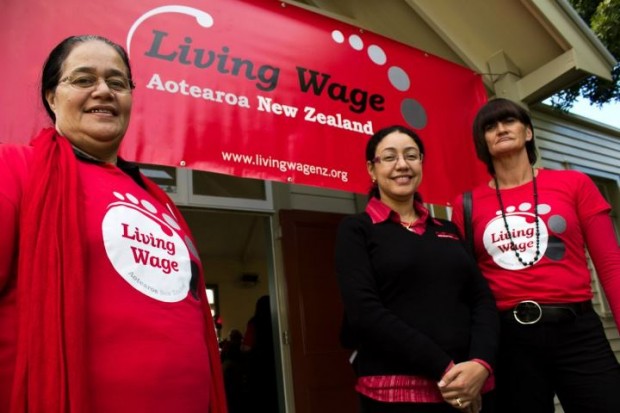 There was another in what has been a long stream of heartbreaking stories this morning concerning a Porirua family struggling to make ends meet. But this is not a family relying on benefits to survive. Both parents work full time.

New statistics this week show the gap between the rich and poor is widening, but the government rejects the idea inequality is rising.

Situa Tangatauli works three cleaning shifts throughout the day, starting at 6am and finishing at 11pm.

Her husband is a security guard working in the afternoon and evenings. They are both on the minimum wage of $15.25.

She said she felt guilty that despite them working the equivalent of two full time jobs, they could not afford to give their two young girls the simplest things.

“My oldest one has joined a basketball team and during the school holidays there was a programme and she had to pay $5 each day,” she said.

“Some days I had to tell her she has to miss this one because I can’t afford to make a proper lunch for you.”

On some days she looks inside her cupboards and all she can offer her children is a biscuit.

“I said to them is it alright and they say ‘mum it’s ok because we know you’ve been working hard’,” she said.

“I know it’s not a proper lunch but they accept what I get for them.”

Situa’s jobs include cleaning two libraries and a toilet.  The libraries are run by the Porirua City Council which regrettably is not a living wage employer.  Of all New Zealand’s territorial authorities only Wellington City Council is and the Councillors had to face the prospect of legal action being taken against them individually when they tried to require contractors dealing with the Council to also be living wage employers.

The situation in Auckland is even worse with the combination of sky high house prices and rampant rental inflation contributing to a crisis where even well paid people are struggling to cope.

And on the flip side senior managers employed by Council are enjoying unprecedented levels of remuneration.  The Auckland Council Chief Executive enjoyed a $60,000 salary increase just before Christmas last year.  Senior manager salaries in the public sector have increased that much that the Remuneration Authority thinks Councillors salaries should be increased by 20% just to maintain relativities.

The response of the Government is regrettable.  This morning on Morning Report Bill English tried to suggest that that there has been no change in poverty levels despite a rampant homelessness problem.  He also tried to suggest that national poverty was all Auckland Council’s fault.  Note to Bill the situation is endemic and nation wide and it is getting worse.

A living wage being paid by Auckland Council is not difficult to achieve.  Catriona McLennan in a recent Herald article has set out how.  All that is required is some political will on the part of the Councillors.

And in the meantime Situa will continue to work three jobs at minimum wage to try and make ends meet.  There has to be a better way.

60 comments on “This is why we need a living wage ”