Those hard to find WIMPs 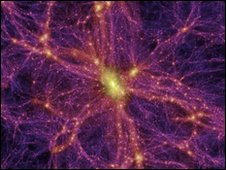 There have been some new results from the search for WIMPs (Weakly Interacting Massive Particles) at the Cryogenic Dark Matter Search (CDMS) in Minnesota. This showed up in The Economist science section last week with an excellent summary of what they were looking for and why in the post “An early Christmas present?.

Around a quarter of the universe is thought to be made up of dark matter, which, as the name suggests, neither gives off nor reflects light. (The balance, once the small amount of visible matter is subtracted, is made of even more mysterious stuff known as ‘dark energy’.) However, dark matter does make itself known through its gravity. This, indeed, is why astronomers believe it must be there. Some galaxies rotate so fast that they should be throwing off their outermost stars. Only the gravitational pull of these galaxies’ unseen halos of dark matter holds those stars in. Observations of the bending of light around clusters of galaxies, as well as the way that galactic structures formed in the early universe, also suggest that there is much more to reality than meets the eye.

Well the CDMS got one. But as non-scientists often complain, science often isn’t clearcut.

Science is a gradual affair, often of finding out what is impossible and eliminating it. Whatever remains may be true. There is probably no area quite as arcane at doing this as in astrophysics. To find these beasts which barely interact with other matter, they have what is effectively an elimination experiment running. What it is eliminating are possible theories. To do this as the CDMS says in their summary (PDF – which is readable by humans)

The Cryogenic Dark Matter Search (CDMS) experiment, located a half-mile underground at the Soudan mine in northern Minnesota, uses 30 detectors made of germanium and silicon in an attempt to detect such WIMP scatters. The detectors are cooled to temperatures very near absolute zero. Particle interactions in the crystalline detectors deposit energy in the form of heat, and in the form of charges that move in an applied electric field. Special sensors detect these signals, which are then amplified and recorded in computers for later study. A comparison of the size and relative timing of these two signals, heat and charge, allows the experimenters to tell whether the particle that interacted in the crystal was a WIMP– or one of the numerous known particles that come either from radioactive decays or from space in the form of cosmic rays. These background particles must be almost entirely filtered out if we are to see a WIMP signal. Layers of shielding materials, as well as the half-mile of rock above the experiment, are used to provide such background suppression.

The CDMS experiment has been searching for dark matter at Soudan since 2003. Previous data have not yielded evidence for WIMPs, but have provided assurance that the backgrounds have been suppressed to the level where as few as one WIMP interaction per year could have been detected.

But the result is another elimination of the impossible, with a hint that they may have actually seen something in the 2007-2008 data sets.

In this new data set we indeed see two events with characteristics consistent with those expected from WIMPs. However, there is also a chance that both events could be due to background particles. Scientists have a strict set of criteria for determining whether a new discovery has been made. The ratio of signal to background events must be large enough that there is no reasonable doubt. Typically there must be fewer than one chance in a thousand of the signal being due to background. In this case, a signal of about five events would have met those criteria. We estimate that there is about a one in four chance to have seen two backgrounds events, so we can make no claim to have discovered WIMPs. Instead we say that the rate of WIMP interactions with nuclei must be less than a particular value that depends on the mass of the WIMP. The numerical values obtained for these interaction rates from this data set are more stringent than those obtained from previous data for most WIMP masses predicted by theories. Such upper limits are still quite valuable in eliminating a number of theories that might explain dark matter.

Now this is a heck of a result, because WIMPs have been postulated as a being around for many decades without being observed, thought maybe not to be observable, and possibly not even been more than a theory. If the theories are correct, then they probably are going through you all of the time. They should be able to increase the probabilities of observation or non-observation in 2010 because

This is precisely what CDMS experimenters (and many other collaborations worldwide) are now in the process of doing. By summer of 2010, we hope to have about three times more germanium nuclei sitting near absolute zero at Soudan, patiently waiting for WIMPs to come along and provide the perfect billiard ball shots that will offer compelling evidence for the direct detection of dark matter in the laboratory.

However, I’m sure that this would never satisfy some of the science skeptics here as being science. After all it is all based on probabilities and elimination of possibilities, the statistical elimination of outliers and background noise, and the correction of raw data to account for instrumentation variance. I’ll bet that they even write peeved e-mails about each other and the data they’re working in.

Which is exactly what is happening in the field of climate change as well as through most science. No big results, just steadily removing the impossible and leaving the possible visible. It is a pity that small minds don’t understand how science works.

25 comments on “Those hard to find WIMPs ”