Rex Widerstrom has been a commentator and occassional guest poster here for a while. He has a unique point of view on the political process and its place in society that you can also see at his blog Shift Focus. In this guest post he looks at the never ending “War on Drugs”. 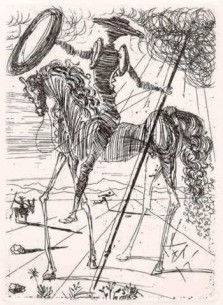 Following a noble quest has that affect on a person; the desired outcome, no matter how unlikely it is to occur, becomes the sole focus. There is a great deal to be admired in the person who sets themselves a goal and pursues it single-mindedly especially if they desire, as did the man of La Mancha, to right an unrightable wrong.

But what if that noble quest causes more harm through its continuance than through its abandonment?

That’s what’s happening with the 30-year response to addiction and its criminal outcomes known as the “War on Drugs”. Like Don Quixote, policymakers are fighting the unbeatable foe.

The Child Rights Network in Mexico estimates that 994 people younger than 18 were killed in drug-related violence between late 2006 and late 2010, though they admit that’s likely a conservative figure.

In February, assassins went hunting for a Ciudad Juarez man, but the intended target wasn’t home, so they killed his three daughters instead, ages 12, 14 and 15.

In March, a young woman was bound and gagged, shot and left in a car in Acapulco. Her 4-year-old daughter lay slumped beside her, killed with a single bullet to her chest. She was the fifth child killed in drug violence in the resort city in one bloody week.

“They kill children on purpose,” said Marcela Turati, author of “Crossfire,” a new book on the killings of civilians in Mexico’s drug war. “In Juarez, they told a 7-year-old boy to run, and shot his father. Then they shot the little boy.”

Those accounts cannot fail to offend the sensibilities of anyone, regardless of their stance on drugs. But what of this passage?

“It may seem contradictory, but the unfortunate level of violence is a sign of success in the fight against drugs,” said Michele Leonhart, head of the Drug Enforcement Administration [my emphasis].

Let’s parse that carefully. Asked for comment on the horrific murder of innocents in the “war on drugs”, the head of the DEA hails it as a “sign of success”.

Can there be any doubt that the “war” is already lost and, to switch from a musical film metaphor to dramatic film one, the generals are in their bunker, the only ones unaware of The Downfall.

There’s a regular moral panic about drugs in New Zealand. The latest being “Kronic”, apparently a New Zealand export, as the panic has spread to Western Australia, where miners are apparently using it to thwart their rigid drug testing regime.

While being bored rigid by a stoner at a flatwarming is hardly a pleasant experience, it pales beside hearing the guy next to you setting the explosives saying “Whoa man… the colours are amazing…”

All joking aside, I don’t like drugs. If I could wave a wand and eliminate them from the world, I would. And not just the ones classed as illegal, either. I’ve seen the harm those can do, but I’ve also witnessed the destruction wrought by someone over-prescribed benzodiazepines, for instance.

Alas magic is outside of my capabilities – thus saving you a laboured Harry Potter metaphor – but I can suggest that policymakers would be well-served by listening to a man who has worked some televisual magic – David Simon, creator of the acclaimed series “The Wire” about the narcotics officers and drug gangs in Baltimore.

Simon had more than twelve years as a crime reporter for the Baltimore Sun, wrote a book which was turned into the NBC television series “Homicide”, and then teamed up with Ed Burns, a real-life cop turned teacher, to create “The Wire”.

In an interview with Bill Moyers recently, here’s what Simon had to say:

David Simon: Because there’s no political capital in it. There really isn’t. The fear of being called soft on crime, soft on drugs. The paranoia that’s been induced. Listen, if you could be draconian and reduce drug use by locking people up, you might have an argument. But we are the jailing-est country on the planet right now. Two million people in prison. We’re locking up less-violent people. More of them. The drugs are purer. They haven’t closed down a single drug corner that I know of in Baltimore for any length of time. It’s not working. And by the way, this is not a Republican-Democrat thing, because a lot of the most draconian stuff came out of the Clinton administration, this guy trying to maneuver to the center in order not to be perceived as leftist by a Republican Congress.

David Simon: Loss of parole. And again, not merely for violent offenders, because again, the rate of violent offenders is going down. Federal prisons are full of people who got caught muling drugs and got tarred with the whole amount of the drugs. It’s not what you were involved in or what you profited from. It’s what they can tar you with…

Bill Moyers: After all these years do you have the answer?

David Simon: Oh, I would decriminalize drugs in a heartbeat. I would put all the interdiction money, all the incarceration money, all the enforcement money, all of the pretrial, all the prep, all of that cash, I would hurl it as fast as I could into drug treatment and job training and jobs programs. I would rather turn these neighborhoods inward with jobs programs. Even if it was the urban equivalent of FDR’s CCC—the Civilian Conservation Corps—if it was New Deal–type logic, it would be doing less damage than creating a war syndrome. The drug war is war on the underclass now. That’s all it is. It has no other meaning.

I guess it’s easy to dismiss Simon as a left-leaning, liberal hand-wringer. He’s in television, after all. But his views are informed by two decades of reporting the drug war in a city which has to be counted as the front lines. But he’s informed by the opinions of Ed Burns, who spent seven years as a teacher in the inner city, after serving 20 years with the Baltimore police.

And for what it’s worth, it accords with my own perspective as someone who first started working with people who were addicted in the 1980s and now sees it amongst 80 percent of the prison population; who sees people released from prison to their families, their friends and their lives on the condition they return clear tests for drugs, and who simply can’t. Even with children and partners and mothers and fathers who love them and want them to stay out of jail, they tell me they’re so desperate it’ll be their drug dealer who collects them when they’re released on parole so they can shoot up in the carpark. Some do make it, but those who have no one, other than other addicts, waiting for them on the outside have no chance.

Until we decriminalise the possession and use (not manufacture and sale) of drugs; till we realise that it’d be healthier to prescribe heroin, or morphine, than the destructive, debilitating soup that is methadone; till we intervene early in the life of anyone addicted, with a finely tuned mixture of incentives and disincentives, we are, like Don Quixote, marching innocents into hell for a heavenly cause.

33 comments on “Tilting at drugmules ”