Trading away our rights

The dark side of the current much-heralded free trade talks is that New Zealand could end up letting foreign firms dictate how the country is run, from quarantine rules to local content laws, unless it learns the lessons of previous trade deals. 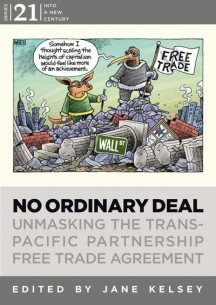 A new book edited by Auckland academic Jane Kelsey, No Ordinary Deal, points out that free trade deals are now about far more than just tariffs. In the name of freeing up markets everywhere, they tend also to prevent governments from taking any steps that might harm foreign businesses – even basic measures that democratic societies take for granted, like controlling tobacco sales.

The result, the book warns, is that foreign companies can often sue governments for millions of dollars simply for carrying out the anti-poverty, communitarian policies that their electorates want.

The background to all this is the latest round of trade talks, scheduled for Auckland next month, in which New Zealand will be talking about extending a current free trade agreement, with Brunei, Chile and Singapore, to cover other Pacific Rim countries including, crucially, the United States. These talks – known as the Trans-Pacific Partnership Agreement or TPPA – have, by holding out the prospect of free trade with the US, got ministers all excited.

No Ordinary Deal, however, warns that that hope may prove illusory. The US has almost certainly no intention of dropping barriers to New Zealand dairy farmers. As economist Joseph Stiglitz said of previous trade talks, ‘One can’t think that New Zealand would ever get anything it cares about.’ We, having removed almost all our tariffs, have no negotiating power; and the US very rarely gives away any significant concessions.

A wider Pacific trade deal that included Japan, say, could bring benefits for New Zealand by cutting import tariffs. But even those benefits may be less than expected, the book warns. The IMF has predicted that Australia’s 2004 free trade deal with the US, for instance, will actually shrink its economy by 0.03 per cent a year.

Since 2004, Australia’s trade deficit with the US has widened from US$6.4bn to US$11.6bn. Free trade deals often allow the bigger country to import more into the smaller than vice-versa. They also make it easier for companies to move offshore, knowing they will face no barrier to entry, rather than stay in their home country. Advocates of free trade usually rely on the abstract idea that it automatically gives the economy more dynamism and makes investment less risky – an assumption not backed up by any evidence, the book argues. (It is surprising, the book argues, that no formal study of the TPPA’s benefits to New Zealand has been carried out.)

But if the benefits are small, the dangers are great, No Ordinary Deal warns. It is not clear just what the current talks will mean, because – in a fundamentally undemocratic move – the text of any trade deal remains secret until after it is signed. But judging by previous deals, the US will exert enormous pressure to include clauses that prevent any policies harmful to foreign companies – even if they might be justified socially.

Such provisions in past trade deals have forced countries to abandon quotas for local content, weaken policies that give citizens cheap generic medicines, and drop controls on tobacco advertising. More seriously, some countries have even given foreign companies the right to sue them if they feel disadvantaged by law changes. This extraordinary move, which puts companies on the same legal footing as democratically elected governments, has already cost countries hundreds of millions of dollars in court cases worldwide.

However, the book also highlights how Australia resisted most US attempts to include these dangerous provisions – partly thanks to a huge lobbying campaign by leftwing groups, trade unions and charities. The argument is not against trade: almost everyone accepts that increased trade between nations is a good idea. The point is the terms of that trade. New Zealanders should be very concerned if, in order to gain some potentially quite small benefit, the National government signs away our right to protect local communities, take public health measures that may hurt tobacco companies, and, in the most fundamental sense, organise our society the way we want it.

32 comments on “Trading away our rights”