Treasury says own forecasts too rosy

Oh dear. Only two weeks after its Budget 2011 economic forecasts were released, Treasury is already warning they are too optimistic. In their defence, they say the forecasts were settled in April and growth prospects have got worse since then. Well, you’re not much of a forecaster if you can’t see that happening in the middle of an oil shock.

Brendon Burns has stats that show Treasury has been wrong in its quarterly growth prediction 28 out of the last 30 times. I’d have about the same odds of success leaving sheets of paper with the numbers -1.0% to +1.0% scattered around my living room and picking whichever one the cat walked on first.

Remember, that’s actually predicting the past: GDP figures are released nearly 3 months after the quarter ends. And Treasury can’t even get that right.

Over time, all those wrong estimates add up, as David Cunliffe showed: 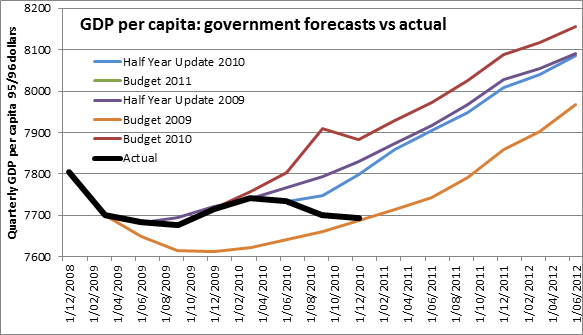 On one hand, it’s very easy to poke fun at Treasury’s forecasters and suggest that, perhaps, the best way they could contribute to the economy would be to hand the dartboard over to a minimum wage worker, give up their fat salaries, and get a real job that actually delivers and people can rely on – postman for example.

On the other, these forecasts are very important because they form the basis of how much the government thinks it will get in taxation and pay out for certain policies, which in turn tells the government how much it can afford to spend boosting needed services in lolly scrambles for the rich. When the forecasts are drastically wrong, as they have been for in the past two budgets and now are confirmed in the latest budget, that spells less tax, more dole payments, and extra borrowing.

Can we afford such poor forecasting?

Don’t get Treasury to calculate the answer to that one.

29 comments on “Treasury says own forecasts too rosy ”