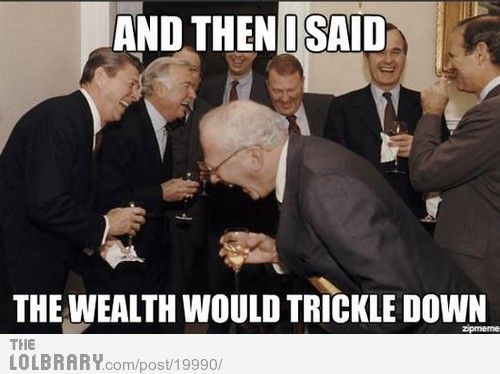 A couple of recent Guardian posts sum up how current economic settings are doomed to fail, unless the only goal is to preserve privilege for the 1%.

The first suggests that wealth does not trickle down, it floods offshore into tax havens.  The estimate is that between US$21 trillion and $32 trillion has been sent out of countries to tax havens.  About US$10 trillion is owned by just over 90,000 individuals.  This is US$11 million each.  This is their loose change.

These estimates reveal a staggering failure,” says John Christensen of the Tax Justice Network. “Inequality is much, much worse than official statistics show, but politicians are still relying on trickle-down to transfer wealth to poorer people.

“This new data shows the exact opposite has happened: for three decades extraordinary wealth has been cascading into the offshore accounts of a tiny number of super-rich.”

In total, 10 million individuals around the world hold assets offshore, according to Henry’s analysis; but almost half of the minimum estimate of $21tn – $9.8tn – is owned by just 92,000 people. And that does not include the non-financial assets – art, yachts, mansions in Kensington – that many of the world’s movers and shakers like to use as homes for their immense riches.

“If we could figure out how to tax all this offshore wealth without killing the proverbial golden goose, or at least entice its owners to reinvest it back home, this sector of the global underground is easily large enough to make a significant contribution to tax justice, investment and paying the costs of global problems like climate change,” Henry says.

So not only do tax cuts for the wealthy not work, it almost certainly makes things worse for the tax cutting country.

The second is this fascinating article that collates data and analysis from throughout the world about the effect of a universal basic income.  You know the idea that dear leader thought, and the media dutifully reported, was barking mad?

It has a number of links and a great deal of information.  The essence is:

Welcome to the world of a unconditional basic income, or UBI, otherwise known as citizens’ income or social wage. It might look like the stuff of insane utopianism, but the idea is now spreading at speed, from the fringes of the left into mainstream politics – and being tried out around the world. The UK Green party has supported the notion for decades: staunch backing for a version of UBI was one of its key themes at the last election. At its spring conference last month, the Scottish National party passed a motion supporting the idea that “a basic or universal income can potentially provide a foundation to eradicate poverty, make work pay and ensure all our citizens can live in dignity”. A handful of Labour MPs have started to come round to the idea – and serious work is being done among thinktanks and pressure groups, looking at how it might work in the here and now.

Meanwhile, there have been UBI-type policies and experiments in India and Brazil. These have suggested that, contrary to modern stereotypes about “welfare” sapping people’s initiative, a basic income might actually increase people’s appetite for work, by adding to their sense of stability, and making things such as childcare and transport more accessible. A pilot of a UBI-ish policy whereby people on benefits are paid unconditionally is happening in Utrecht, in the Netherlands; other Dutch towns and cities look set to follow its example, and there are plans to pilot a more ambitious kind of basic income in Finland. On 5 June, the Swiss will vote in a referendum on a plan that would see all adults receive about £1,700 a month, with an extra £400 for each child.

And then there is the rising noise from Silicon Valley. The California-based startup incubator Y Combinator has announced that it wants to fund research into UBI’s viability. Its president, Sam Altman, says: “It is impossible to truly have equality of opportunity without some version of guaranteed income.” In New York, the influential venture capitalist Albert Wenger has been sounding off about a basic income for at least three years, claiming it offers an answer to a very modern question. If, as he says, “we are at the beginning of the time where machines will do a lot of the things humans have traditionally done”, how do you avoid “a massive bifurcation of society into those who have wealth and those who don’t”?

These two articles cover issues that need to be addressed and even in sleepy New Zealand represent the cutting edge of current political debate.  Should we allow the uber wealthy to avoid tax or should we insist that everyone pays their fair share so that each of us can enjoy the benefit of a universal basic income?

120 comments on “Trickledown has failed ”