National have not had a great year, but the class size fiasco last week has raised the bar on their awful. Worse: the nice man Mr Shearer first raised their stupidity on class sizes, and their poll ratings have dropped noticeably.

So it’s time to roll out their big gun again: a charm offensive from the nice man Mr Key.

So on Sunday we had prominent stories about his nice holiday with his family, visiting the Queen. It may seem creepy at first sharing all your personal photos of your family from your iPhone with any passing reporter, but I guess you get used to it.

It’s lovely that he gets to catch up with his family on European holidays, and that they can afford to pay personally for Bronagh to accompany him on official visits, but I’m not sure why I’m hearing about it. But then I’m not sure why the media thinks I want to know Britney’s inner-leg measurement either.

To follow that up, we have today’s Stuff live chat.

It covers all the important topics: Yup, as well as having Pixie Kevin type that he isn’t a clone, Pixie Kevin also picks some favourite bands:

But some topics aren’t so easy:

And the moderators obviously weren’t thinking about his new watch-ad style promo photo: 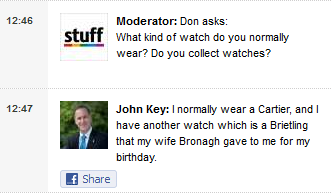 Unfortunately JK hasn’t seen our GINI recently (by which I mean, since the 80s):

Still, it’s nice he prizes our egalitarianism – now maybe he’d like to do something about us being one of the least equal developed countries?

But, ignore my letting facts get in the way of a good story, and, ah, see now isn’t that better? Now you’ve read all about that nice man Mr Key, you’ve almost forgotten about class sizes, asset sales, Nick Smith, ACC, picking the pockets of paperboys, unaffordable tax cuts, high unemployment, RONS, lower real wages than 2008, pokies for convention centres, TVNZ7, everyone leaving for Australia, the impending Super problem or even that Bill English exists.

Just close your eyes and think of John, and all National’s troubles will go away…