Trump scooped up the white vote that Democrats abandoned

How did Trump smash straight through Hillary’s famous “blue wall”.

He did so in many ways, but a major one was by realising that one in three American voters are white non college graduates. And that the Democratic Party and left leaning liberals had long taken this demographic for granted while studiously ignoring (or even outright dismissing) their growing economic and personal financial concerns. 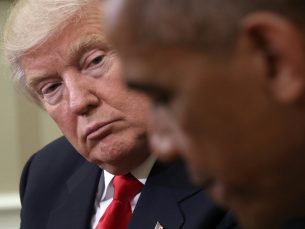 What was also of enormous help to Trump was the Democrat’s truly weak choice of candidate: Hillary Clinton. In many ways 2016 was more to do with the fact that Clinton lost the election by being unable to hold together the “Obama coalition” of voters, than by Trump winning the election.

She did 5% & 6% worse respectively with African Americans and Latino voters compared to Obama, for instance.

Revelations about how the DNC had treated Bernie Sanders may also have hurt her with millenials aged 18-29, who in this graphic from the Telegraph, decided that they were a full six points less enthusiastic about her than about Barack Obama in 2012. 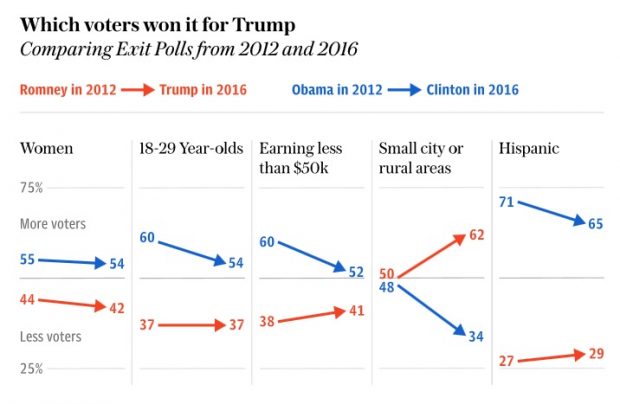 Other Clinton supporters thought that her status as the first female Presidential candidate in the history of the United States would robustly propel her to victory, with support from women. Some believed that women were the demographic that was going to decide this election.

And in a way, they were right – but not in the way they may have meant. While Clinton clearly won the female vote overall (albeit with a 1% drop from Obama 2012), non-college graduate white women broke for Trump by 28 points. Trump garnered a massive 62% of their vote.

But that’s nothing compared to non-college educated white men, who broke for Trump by an astounding 49 points; he gained 72% of their vote to Hillary Clinton’s 23%. Trump’s lead amongst white men easily surpassed Ronald Reagan’s previous record of 38 points.

These particular people, men and women, have been the Democrat’s mid-west core voter base of factory workers, auto industry employees, labourers, small store owners, mechanics and tradesmen since the days of the Great Depression. Yes, it’s been gradually happening for years, but one could conclude that they’ve fully left the Democratic Party now that they have found a vaguely palatable alternative. (Or maybe it was the Party that left them.)

These people pushed Trump to victory in states where Republicans have not had a single victory for more than 20 or 30 years. Pennsylvania. Michigan. Wisconsin. The long term impact of this fundamental partisan change would be hard to over state.

The Clinton campaign’s hubris in taking Wisconsin for granted even led them to totally ignore the state in terms of campaign rallies by the Clintons, and by Barack Obama until it was far too late.

Of the Wisconsin race for instance, USA Today said:

In Wisconsin, Trump got roughly the same number of votes — 1.4 million — that Romney got while losing the state in 2012. The key was that Clinton got almost a quarter-million fewer votes than Obama, paving the way for Trump victory in a race where turnout lagged behind the previous four presidential races in the state.

Trump also showed that continuous MSM sneering and labelling of him as a racist, xenophobe, bigot etc. did not in fact discourage ethnic minorities to vote for him (as compared to the low Republican norm that is).

Trump maintained, or even slightly improved, his vote amongst Latinos and blacks when compared to Romney, gaining 29% and 8% of those voting blocks respectively.

In summary this piece posted on Real Clear Politics says it all: Donald Trump stole the Democrat’s base right from under their noses.

What was going on was that Donald Trump was stealing the Democratic Party’s base from right under their noses.

For as long as I’ve been following politics, that base was the blue-collar class.

The Democrats were the party of the working man.

The Republicans were the party of the bosses.

Then along  comes this guy who’s been a boss his whole life – but decides to make a blatant pitch for the working man’s vote.

And the Democrats fail to even notice.

And most will not be returning any time soon.

(NB I will be moderating comments to this post hard for personal abuse, name calling and the like).