Turning a blind eye to poverty 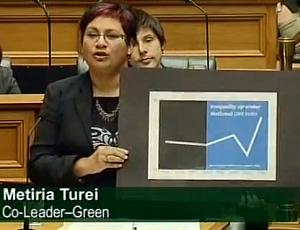 In Parliament yesterday, Metiria Turei challenged Key on his record on poverty, holding up a graph of the GINI index, showing the increase in inequality under National. Key nonsensically blamed the recession – why must it be that in a recession the poor get poorer while the rich still get richer? That’s a result of policy that protects the rich, not an inevitability.

And so what was Key’s response?

“That graph looks like the National Party’s poll ratings while in Government, so I appreciate the member showing it to the House.”

What a disgrace, trying to crack jokes about poverty while quarter of a million kids are in poverty, 60% of them in chronic (7 years plus) poverty.

Key went on to dismiss the suggestion of the Children’s Commissioner to extend the ‘in-work tax credit’, renamed the ‘child payment’ to those quarter of a million kids living in beneficiary families (which is a lot like a Greens’ members bill that got drawn recently). He called it “dopey”. Of course, Key’s got enough money that his kid can fly around the world to play baseball, so what does he understand about or care about children living in poverty?

The fact is that National has a disgraceful record on poverty and inequality and it isn’t just ‘one of those things’, it isn’t outside the Government’s control. It is the result of tax cuts for the rich, wage suppressing policies, the complete failure of this government to create jobs, and its unwillingness to extend the child payment to families that are out of work on the basis that it wants to “maintain the gap between welfare and work” – the same justification that National used for the benefit cuts in the early 1990s.

I also think that Key ought to look at a graph of National’s poll ratings, it looks a lot different from that.

117 comments on “Turning a blind eye to poverty ”