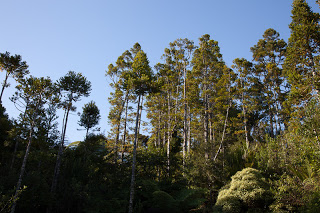 There was an interesting variety of views expressed recently in the Herald on the ancient Titirangi Kauri tree that this week avoided the chop, at least for now.

Predictably Rodney Hide thinks that the whole thing is an attack on personal property rights and land owners should be able to fell trees just because they own them.  He said:

Quick, whack your old trees down. Otherwise you run the risk of having MP David Cunliffe living up it and being bossed about from New York by former Prime Minister Helen Clark. Supermodel Rachel Hunter will weigh in with obscenities on Facebook: that’s because you fail to appreciate the “life force” your tree holds.

That’s what has happened to architect John Lenihan and his family. They were going about the lawful enjoyment of their Titirangi property, including chopping down their old kauri. It was theirs. They bought it. But no matter. They had to be stopped.

Hide’s approach allows for no allowance for the community good that trees provide, for the stability they provide to neighbouring properties, for the habitat they provide for indigenous fauna or for the beauty they give to the local area.  According to Hide these things are of no value and totally irrelevant.

Hide’s view clashes with the view of Herald columnist John Roughan who has written a column which I agree with entirely.  This is an experience I am not sure I have had before.  Roughan has shown himself by this column to be something of a greenie at heart.  He says this:

One of the silliest things the present Government has done in my view was to make blanket tree protection illegal. Now, any trees a neighbourhood wants to protect need to be individually designated by the council, which is impractical and was intended to be.

National did this in its first year of power, no doubt fulfilling an Opposition promise to supporters railing about restrictions on the right to do what they like on their own property. It is surprising how many buy into a leafy street and immediately set about making it less so.

In the Cabinet room he might have argued differently. He and new Conservation Minister Maggie Barry weighed into the stand-off over a kauri marked for felling by a property owner at Titirangi this week. They were on the kauri’s side, which could mean Barry is making a difference in the Cabinet. She was not even in Parliament when blanket protection was outlawed.

Her words this week were notably stronger than Smith’s. He hoped the kauri could be “spared if at all possible”, adding that it was the council’s call. She said, “I do not support the felling of any mature kauri trees”.

Let’s hold her to that next time the Government starts to cut a motorway through a swathe of them.