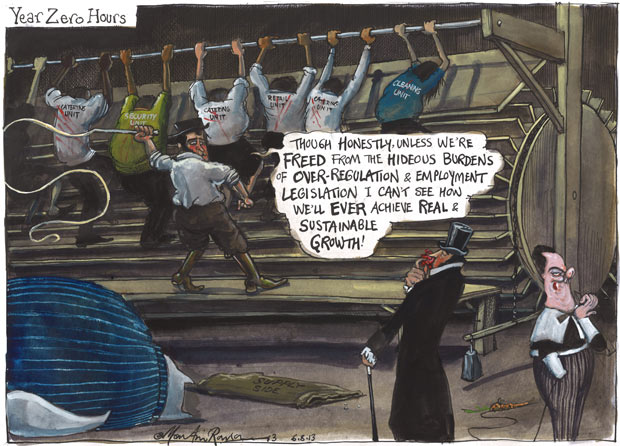 There’s a Guardian-led campaign in the UK at the moment over “zero-hour contracts.”

Zero-hour contracts are like some at the Port of Auckland (and the port company want them all to be): no guaranteed hours, on-call at a moment’s notice, no job security, but no ability to get another job.  “Flexibility” for the employer, who has a complete whip hand.

To some the answer is how good this is for business, avoiding the problems of Southern Europe (with their civil-service jobs for life), and some job is better than no job.

But the reality for the employees is very different.  There’s plenty of talk about how it can be what they want, but noticeably the BBC couldn’t actually find someone who liked being on one.  It can work for some students / retired people topping up their incomes, but they’d probably still prefer to have some hours guaranteed.

There are an estimated 1 million on these contracts in the UK and the campaign has resulted in a government inquiry, which may led to regulation.

It appears the largest sector of workers are in the care centre.  Councils cutting austerity budgets are reducing the rights of their workers.  And without the guaranteed hours, workers struggle to pay the rent (let alone get a mortgage), pay the bills, even get food.  Doing society’s duty of looking after the sick and elderly, they themselves are being abused.

It’s common in the private sector too – McDonald’s and Sports Direct have the contracts as a matter of course: each have 90% of their staff (83,000 and 20,000 respectively) on zero-hour contracts.  Even Buckingham Palace is in on the act.

Marx would call this by what it is: exploitation.

… there is an early 19th-century feel to zero-hours contracts. It is as though Britain has gone back to the future, returned to an age where the employer had the whip hand and where the rights that workers enjoyed under the feudal system had been removed.

Research by the Resolution Foundation thinktank shows that those on zero-hours contracts earn less than those on staff or on fixed-hours contracts. They have no rights to sick pay. Holiday pay is often refused. And there is plenty of anecdotal evidence to show that if they turn down work when it is offered – even if it is to take a child for a medical appointment – they will be pigeon-holed as not suitably “flexible”. The choice to refuse work is, in reality, no such thing.

As the Guardian says zero hour contracts are not unavoidable.  If McDonald’s can predict how much meat they need for their burgers, they can surely predict approximately how many hours they will be able to offer an employee, and give them some security in their contract.

… there are other ways to solve this conundrum than indenturing workers or making them wait at the metaphorical factory gate for a tap on the shoulder.

The contented majority, as the liberal economist JK Galbraith termed the 60% of the (ageing, pension-saving) population who use their money and votes to craft the political economy to keep them in clover, are unwittingly supporting zero-hours contracts. Maybe if they knew that paying higher prices meant wages would rise and employment contracts would be more secure, they would open their wallets. The trend, however, is in the opposite direction.

It’s likely to be the case here too, as employers take notice of the government’s philosophy and employment law changes and implement “flexibility”, forgetting their half of the social contract to provide stability and security to their employees.  They lose out with a lack of loyalty from their employees, and their better staff will go elsewhere; but the trend to lower wages and conditions (including health & safety – something the CTU is focusing on with their forestry and mining campaigns) in many parts of the economy is strong.

But wouldn’t those of us with secure wages rather pay a little more for our services and have all members able to join in society?  We’ll be richer as a community for it…