The apparent coup was immediately welcomed by Donald Trump who said he would use the “full weight” of US economic and diplomatic power to push for the “restoration” of Venezuela’s democracy.

The Organisation of American States (OAS) has recognised Guaido as interim President and it’s being reported that Canada will also do so later today. It’s likely that right wing Governments across South America will also come out in support of the opposition leader in the next few hours. 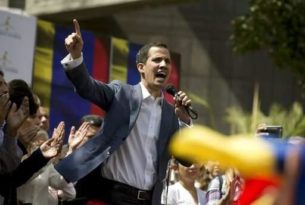 Speaking to tens of thousands of protesters in the capital, Caracas, Guaidó, the head of the opposition-run national assembly,  said he was “formally assuming the responsibility of the national executive”. However, there does not seem to be any constitutional ability for him to take this step.

Guaidó, said his move was the only way to rescue Venezuela from “dictatorship” and restore constitutional order. However, Maduro was re-elected to the presidency late last year and remains in control of the state and, importantly, the military.

There seems to be a real chance that this latest coup attempt will degenerate into significant violence.

It certainly has the feel of Chile ’73 about it.