Visiting the City that Rocks

The slow round of extended family xmas locations has this year located Lyn and I in Christchurch. Which has made for an interesting boxing day with a certain amount of rocking that is not attributable to the results of the gorging the day before.

I’ve been in earthquakes before. But never in quite the series that we have had today. You can see from the geonet list of recent quakes that it has been a fine day for a earth sciences student.

I missed the early morning earthquakes due to some self administered anesthetic. However I was awake for the wee shake at 0803. Most of the day I have been feeling the city start to rock, leading me to eye the nearest exit/table/door while trying to estimate the severity. 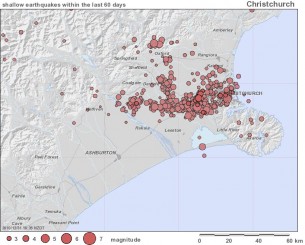 But you can see the difference between visitors and residents. The residents were clearly shaken up by the 7.1 a few months ago and are a lot more uncertain and anxious. Mind you they have property here as well and we visitors don’t. It is their pictures and ornaments that keep dropping on the floor. But what brings the quakes home to a visitor in our borrowed house is that the toilet door that was fine this morning will no longer close.

However it doesn’t appear to have stopped too many people from visiting the malls today from what I could see. I had to go to purchase some essential items that we’d forgotten or were needed – like a coffee plunger for this caffeine addict.

As a born Aucklander, what always strikes me is the strangeness of the largely European’ness of being in the ‘mainland’. I grew up in a Auckland with its phenomenal immigration from overseas and from the rest of NZ. On the boxing day wander around the crowded malls the low amounts of obvious cultural differences from polynesia, asia, or islam. I’d sort of got used to living in a largely european culture in my four years in Dunedin. But I always had this sense of going back home when I’d wind up becoming a member of the largest minority back in the Auckland rather than part of the supermajority in the south.

Back home again, and three kilos more weight… With a better link, time to post this boxing day post

9 comments on “Visiting the City that Rocks ”