Wages fall, except for union members

The Labour Cost Index tells us that most workers this year failed to get pay rises to match inflation in the past year. 52% got no increase. 4% got less than inflation (2%, represented by the green line on the graph). 1% even got pay cuts. That’s a dramatic change on a year ago. 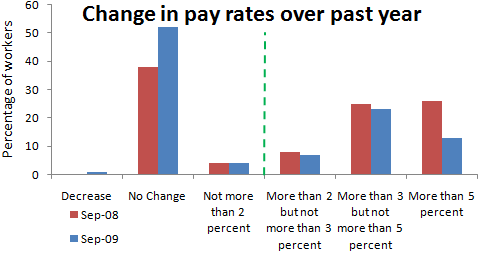 Well, so what, eh? I can hear the Right now: there’s a recession on, we’ve all got to do our bit (unless we’re CEOs or ministers at the trough), and all that other house-slave nonsense. Why is it nonsense? Because it was almost entirely non-unionised workers who didn’t get pay raises. 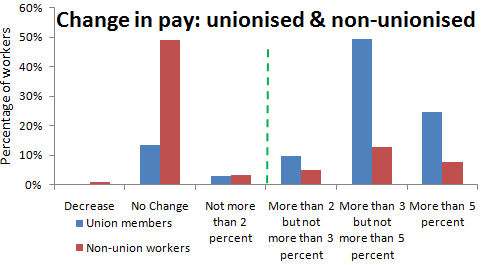 Pretty stark huh? Nearly all union members got a pay rise above inflation – 50% got 1-3% above inflation, 25% got more. Nearly all non-union workers got an effective pay cut – 50% got 2% less than inflation, a few did even worse. It’s not a recession thing, that’s just an excuse. The fact is that with unemployment up the boss doesn’t have to adjust your pay for at least inflation to keep you, and that’s not going to change just because the recession is supposedly over.

So it’s pretty simple really. If you want a pay rise or even just to maintain the buying power of your pay packet in John Key’s New Zealand, you’ve got to join a union. Otherwise, get used to watching inflation eat away at your income.

42 comments on “Wages fall, except for union members ”