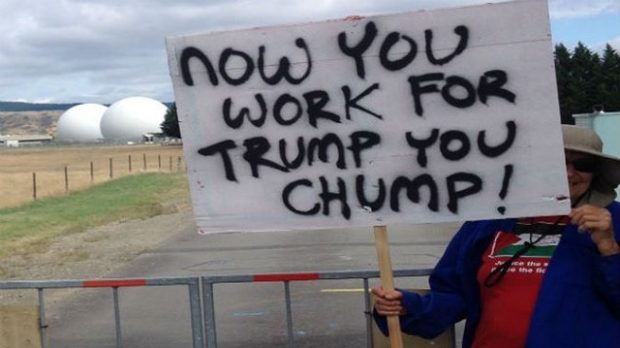 It’s worth asking ourselves what Goriz Gharaman was doing protesting at Waihopai. It’s the right place to protest.

Protesting against privacy incursions is not uncommon, but the bigger protest was missed in emphasis: Waihopai prepares us for war. It prepares intelligence that is usually shared among only five countries. That clarifies which side New Zealand is on: the side of New Zealand, Australia, Canada, the United States, and Great Britain.

The most likely place that war will break out in the short term is North Korea.

Under the 6th threat point – instability – I would expect it highly likely that North Korea is now on that list.

In the increasingly possible event that war is called by the United States against North Korea, Australia (like last time) will be immediately pulled in. That’s because the 2014 U.S.-Australia Force Posture Agreement may have limited impact numerically on North Korea, but the 1,250 (soon to grow to 2,500) U.S.Marines and equipment based in northern Australia would be mobilized.

What will be more useful from both Australia and New Zealand is military intelligence useful to aircraft and to space. Already, B52 bombers have deployed to the Northern Territory on exercises, and new facilities due to be built at RAAF Base Darwin and RAAAF Base Tindal could make this more sustainable. Halluva long sortie up to North Korea, but a really good option in the event of all-out or even nuclear war. Chilling way to think, but this is the scale of risk the U.S. and North Korean leadership have put us in (fyi if you want to see U.S. F-16s in action, there’s a team coming to the Wanaka Air Show this Easter).

The joint U.S.-Australia Pine Gap satellite control and intelligence gathering facility near Alice Springs proves command and control for surveillance, communications, and ballistic missile early warning satellites orbiting over the region, and would be a crucial element in all high altitude and space elements of such a conflict. Our own Waihopai facility integrates with such facilities under the Five Eyes agreement.

So it’s worth protesting at Waihopai.

Like last time, New Zealand in the event of a war in the Korean Peninsula will be asked a very direct question about whether it will provide other, more material military support. It’s time to at least rehearse the question. Many say that there are no military options with North Korea. Well, there are but they are all terrible. Just because they are terrible, doesn’t mean we have the luxury of ignoring our most likely Pacific conflict. Australia, moreso than New Zealand, may be suffering from war weariness after the experiences in Iraq and Afghanistan. But that won’t stop it happening. Just because the choices are difficult, our own coalition government would also have to face them fast.

Golriz Gharaman was protesting about Waihopai being used to invade information privacy:

Fine day to protest a spy base in Waihopai! Seriously, it’s time to stop helping Donald Trump (or anyone else) unlawfully spy on our Asia Pacific neighbours 💚

The left can and should start to protest New Zealand’s role in Five Eyes through Waihopai, but they can do so by focussing on the very present threat of war.

14 comments on “Waihopai and North Korea ”