Was this summer, that summer?

There is a heatwave hitting the northern hemisphere. It’s not so much heatwaves affecting some parts of the northern hemisphere, as it is a hemispheric heatwave. You won’t really get that from media reports from the likes of the BBC and others, that tend to be reporting (and sometimes celebrating) stuff as discrete weather events.

A pared down and simplified picture of the jet stream would look something like a sine wave that has peaks and troughs gliding in a west to east direction. Weather fronts follow in behind the peaks and troughs. Obviously, if those peaks and troughs aren’t traversing the globe as they usually do, then weather becomes “stuck” – in this case occasioning much longer periods of more intense heat than normal. 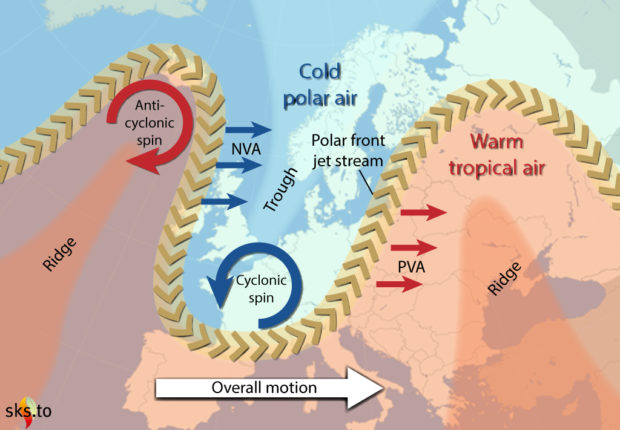 Image for purely illustrative purposes only and not intended as a graphic example of current conditions in the Northern Hemisphere.

We’ve added over one degree of heat to the world, mostly by our stupid burning of fossil fuels. That burning adds CO2 to the atmosphere and oceans and results in a colossal build up of energy in the form of heat. That energy isn’t dissipated across the world in a uniform manner. So, one degree of warming does not mean that heatwaves will be one degree hotter than they were last century.

The thickness of the troposphere (the lowest level of the atmosphere) depends to some degree upon temperature. It extends to about 9km above the poles and 17km at the equator – the jet stream flows at the intersection between the troposphere and the stratosphere in a region of constant temperature called the tropopause. The full set of dynamics involved in the jetstream’s movement is complex, but a simple and accurate enough picture of what has happened can be had by imagining a river flowing down a mountain side, and comparing that to what happens when it flows across a flood plain.

Like the river, the jet stream has begun to meander as the gradient or slope of the tropopause between the poles and the tropics has leveled out. That allows hotter air to get further north than before and colder air to get further south. Hot air getting north heats the arctic region and diminishes the gradient the jet stream rides across even more than before and …well, I’m sure you get the picture. The troposphere above the pole isn’t going to spontaneously thin out and bring the previous gradient back into existence. We’ve set up a situation with regards the jet stream that will now persist until the world cools.

And it seems from reports of recent years, that the more the jet stream meanders, the more apt it is to fall into a standing pattern whereby the peaks and troughs do not migrate west to east as expected, pulling weather along as they go. So hotter heat waves, persistent cold snaps, heavier rains, intensified droughts, longer wild fire seasons, more frequent coastal flooding,….

Basically, the world most of us knew in our childhood has ended. And it’s not coming back. The world the planet’s being turned into is not a world that’s going to be cutting us any favours.

Swathes of China (and elsewhere) may be uninhabitable by as early as 2070. Twenty odd metres of sea level rise is already locked in (WAIS ,Greenland and parts of East Antarctica were not ice covered the last time CO2 levels were this high) and most of that sea level rise may eventuate across a period of mere decades because of ice cliff instability and hydro fracturing. Species are dying – going extinct. And then there’s the rest of it.

I’m not going to ask you to have a think about what the hell you’re doing. I accept that people – especially the middle classes with all their investment in the way things are – are going to carry on doing what they do until they can’t do it any longer. Maybe I’d break out the popcorn, if I liked the stuff and thought it was going to be available for the duration…

10 comments on “Was this summer, that summer? ”