We used to be better at this

Danyl at Dimpost had a good post the other day about benefit numbers and showing that they go up in relation to hard economic times – not because people these days are a bunch of lazy solo parents who just need a kick up the arse. If you look back even further than he did, you see that unemployment is a result of ideological political choices.

Here are the long-run numbers on the dole and DPB from MSD’s Statistical Report: 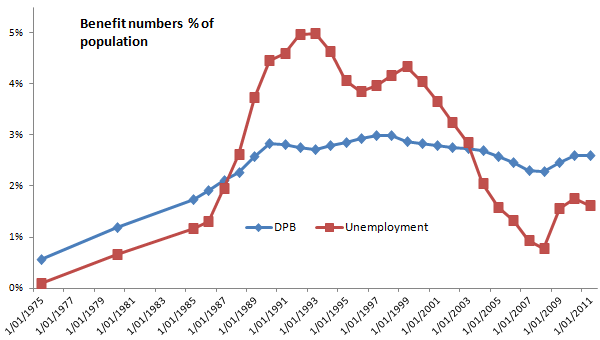 As Danyl points out, there’s no ‘crisis’ in DPB numbers that justify the Nats’ obsession with going after solo mums. There has been an increase during the recession but, even so, the numbers are significantly below the trend of the past 25 years.

The DPB was introduced in 1974 mainly to give women and their children some measure of financial independence if they had to leave an abusive relationship or the relationship broke down for other reasons. It took time for that be fully realised – every battered woman in the country didn’t leave her husband as soon as the DPB became available. But since the mid-80s DPB numbers have been between 2% and 3% of the population.

There is some link with unemployment numbers with the correlation suggesting that the ‘zero unemployment’ level of DPB take-up would be about 1.5% of the population – above that is due to economic factors. In today’s numbers – full employment would bring about 48,000 people off the DPB.

And it wasn’t always this way. Look at the start of the graph. 0.1% of the population on the dole – and that was up on a decade before! The huge rise in dole numbers is clearly linked to the ideological moves of neoliberals who decided it was better to have an army of unemployed people on the dole – creating competition for scarce jobs to drive down wages.

The Right would respond that, before that, tens of thousands were employed in ‘do nothing’ jobs by state departments that acted as employer of last resort. Well, when the alternative is paying out $11,000 a year for the dole, losing another $8,000 in tax take, depressing wages, and the numerous social consequences of endemic unemployment in communities, employing less than 2% of the population in jobs that might not be strictly economic viable in their own right seems like a fair deal overall.

When you consider the total costs and benefits, having the government shell out some coin to create jobs for 60,000 people that wouldn’t happen on a purely commercial basis seems like a social and fiscal winner. We used to do it, after all. But do any of our parties have the imagination for that these days, or have they all drunk the neoliberal kool-aid so much that they think having tens of thousands of people on the dole is unavoidable, even natural?