Finally, I can reveal the operational structure of Whanau Ora. The left side is the existing system, the right side is all the Whanau Ora additions. I drew this myself in five minutes in Paint but it’s about as professional as anything you’ll find in the Whanau Ora Taskforce report. 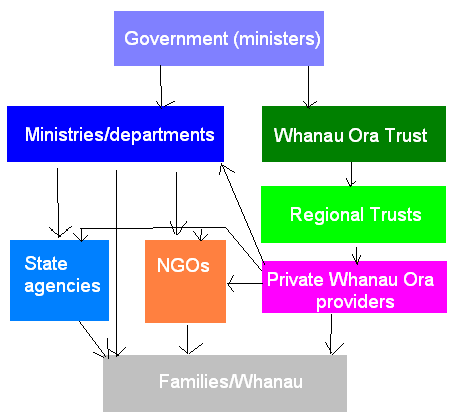 Hmm, looks like a lot of new ‘back office’ jobs, eh? A lot of private ticket clipping for no actual change. And still no-one knows quite how those private Whanau Ora providers will deliver services from themselves, government bodies, and NGOs.

Maybe we should turn to the official diagram: 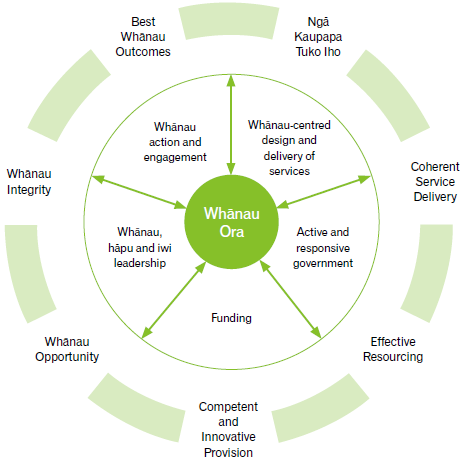 I’m not even kidding. This is the Government Taskforce’s report. What does this graphic even mean? Look at it. I want to mock it but I can’t, it’s just a collection of buzz phrases arranged in a nonsensical array with arrows and circles that don’t mean anything.

God, I would love to see a journo or Labour MP hold up this graphic and ask John Key to explain it, section by section.

I read through the Whanau Ora Taskforce’s report looking for the substance. I searched in vain. It was 70-odd pages of platitidues that added up to ‘trust us, now give us the money’ (funnily enough, the heads of the Taskforce will also head the group rolling out Whanau Ora and, then, probably the Trust they recommend creating, nice work if you can get it)

Basic questions are not addressed in the report. Questions like:

– what precisely are the problems we are trying to fix?

I mean, it’s obvious that there are negative socio-economic indicators but how is existing service delivery failing to minimise them? (note: not eliminate, policies aren’t failures just becasue they don’t totally eradicate the problem any more than seat belts are failures because people still die in car crashes). The taskforce makes no mention of this.

– what the expected outcomes of Whanau Ora, the modelled results of doing things this way?

There are none. If Gerry Brownlee’s mining policy is ‘dig and pray’ this is ‘reform and pray’. There is no basis in empirical evidence for believing that Whanau Ora will change anything. And if it’s not going to change anything, what’s the point (clue: privatisation/’starve the beast’)

– what evidence is there that the Whanua Ora model is the optimal system to resolve these problems (which haven’t been identified)?

Peter Dunne says “try something new and innovative. The reality is that much of the work to help Maori lift across a bunch of social indicators just has not worked, so it makes sense to try something else,”. It doens’t make sense to just try anything else though. Just because there is a problem and someone says they have a solution doesn’t mean that their solution is a the best one, or even a solution at all. The Taskforce makes no attempt to show hat its model is optimal.

Let’s be clear, the Left has no problem with social serice providers cooperating. It was Helen Clark, you’ll remember, who spoke of 1,000 families who created the most damage in society and needed a coordinated approach by sate agencies and NGOs. It was Labour that set up pathways for partnership. In a number of impovershed regions around the country there are now ‘one-stop’ social service centres.

Continuing that is all good. But that’s not all Whanau Ora does. Instead, it tries to outsource the coordination and service povision (sometimes?) to private providers that will be unaccountable and without evidence that this will lead to cost savings or improved outcomes.

Of course, there will be cost savings, that’s the most measurable thing that Whanau Ora could deliver and it’s clearly all that Bill English is interested in it delivering (and he controls its purse-strings). Private providers will seek to undercut each other for contracts, and that will mean worse services. That’s the inevitable, ingraitned result of the privatisation model.

The last thing we need to be doing is cutting corners when trying to resolve the issues that face the families in the most need. It is worth serious investment to get them off the track they are own. But what we are going to get is corner-cutting, corruption, and incompetence – arising from an half-arse policy. Because this Government has decided it wants to buy off Tariana Turia and sees Whanau Ora as an opportunity for privatisation by stealth.

There’s a reason that these are the first public service reforms since Ruthansia that have the Actoids excited. Whatever it is in Turia’s fevered imagination, in reality Whanau Ora will be about killing off social services, first by outsourcing, then by cutting off the lifeblood of government funding.