What could have been done differently

“Show me how you’d do anything different” says John Key about the Rena disaster. Let me count the ways.

Get specialist vessels as recommended in 2010.
After the Deepwater Horizon disaster, the Maritime Union recommended that New Zealand get one of more vessels with oil response capacity – the the Swedes and Norwegians, among others, have. Gerry Brownlee agreed with them but nothing was done. In February this year, Thompson Clarke presented a report to Maritime New Zealand recommending they reorganise the kit they did have and get more, saying:

“Time is the essence in spill response operations and it is essential that on site response agencies have access to equipment that is not only effective but of a size and weight that facilitates quick deployment if the potential effects of an oil spill are to be mitigated successfully at an early stage. The recommended changes are likely to incur capital expenditure of about NZ$2.4m on new equipment and a write off of about NZ$0.4m of obsolete equipment.”

Nothing was done. In fact, National cut Maritime New Zealand’s policy budget, depriving it of the capacity to reorganise itself in light of the recommendations and collect all the levies it was entitled to to fund new equipment (of course, those were just ‘back office’ jobs)

Get the Awanuia there quicker than 4 days.
The Awanuia is able to pump oil off the Rena. For the first 60 hours, she just sat in port at Auckland. Then, she had to go up to Mardsen Point to offload her oil before going to the Rena. Just stupid.

Get salvors there quicker than 4 days.
The Netherlands is just about as far away in the world as you can get from Tauranga. It took 4 days for the salvors to get here. In fact, when the Awanuia eventually showed up at the Rena, it couldn’t pump off oil because the salvors weren’t there yet.

It’s clear that the operation under the ship’s owners and loosely monitored by Maritime NZ was operating on far too leisurely a timeframe. From which we can draw a broader lesson, that the Nats will never accept: don’t leave the handling of nationally important events to private sector organisations. Their interests are always going to be different from the country’s – they’re not going to pay out to avoid costs that fall on broader society, not them.

Don’t turn down useful offers of assistance
The Lancer inflatable barges should have been out there mopping up oil as it was coming out. Maritime New Zealand ignored the offer due to what appears to be simple incompetence but the government knew the barges were on offer. If I was Key, I would have banged heads together and got them out there.

Organise the locals immediately.
It’s just unacceptable that locals were left to fend for themselves until training was offered on Day 8. Especially when as early as Day 2 Steven Joyce was saying that oil would be coming ashore

Put a moratorium on deepsea drilling.
It is simply indefensible to push ahead with deepsea drilling in these circumstances given the known risks and our manifest lack of capacity to manage a spill.

Replace Steven Joyce
Last week, I said that taking Joyce off the Rena would be seen as making the election campaign a higher priority but that, actually it would the management of Rena that he would be doing a favour. It’s palpably evident that Joyce is not the man for the job. He’s a small time former business owner who got hustled out of his own business and that mentality shows. 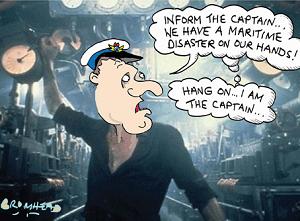 Rather than driving the operation and demanding better, he has made himself excuse-maker- and condescender-in-chief. He spends his time smirking and telling locals to “take deep breaths” and calling journalists “armchair critics”

So, that’s what I would have done differently, Mr Key. But keep on saying nothing could have been improved upon if you like. No-one believes you and it’s costing you votes every day.

70 comments on “What could have been done differently ”