What does Judith do about Gerry?

Anyone else getting slightly tired about the Opposition running lines that the Government’s handling of Covid is an abject failure?

I mean perspective is important.

Right now among Western Developed Nations we are probably ranked the second best nation in handling the virus.  Taiwan is exceptional and deserves to be top of the class.  Other nations, like Australia, Singapore, South Korea and Japan have put up a good fight but are struggling.

And other western nations are not faring so well.

All figures are per million population.  The raw figures make the comparison much worse.

Good old Aotearoa has two outbreaks to handle but with a bit of luck and a lot of work we will get back to the state where we can all go to concerts and rugby games and protests and continue life as usual, just without overseas holidays or the income that overseas tourism brought us as a nation.

Did the Government ever promise that it would all be sweetness and light after we got to the stage where we had no more community cases of Covid?  Hell no.  In fact over the past few months it has been warning us repeatedly that Covid will come back some way some how and we better be ready.

In fact it was so careful to say this dimwits in the opposition saw this as evidence of a conspiracy involving the hiding of rampant community transmission.  Looking at you Gerry.

Should the Government have stopped the latest cases of community infection?  Well anyone with a brain would wait for more evidence to determine what actually happened.  It is possible that the one large cluster came from an infection not through the quarantine system but through the food importation system.  Sure they should have thrown up the barricades and stopped anything being imported to Aotearoa but I expect that the party that was really gung ho about foreign students coming back would have tried politically to embarrass the government if it had done something like this.

And the other cluster, involving one person who worked in a quarantine hotel and who from descriptions so far followed all the rules, seems to just be an extreme example of what can happen.

Here is the problem.  The professionally designed systems may address, say, up to 99.9% of the risk of infection is dealt with.  This means that, say, in 0.1% of cases we will be dealing with a virus infection that we have to deal with. We are dealing with a new virus that we still do not understand properly. Re-calibrating our understanding and our response to it will continue for some time.

Should there be weekly testing of all workers in quarantine facilities?  On June 23 David Clark announced enhanced testing of staff in these facilities. I am sure implementation of the announcement is being rigorously reviewed right now.

But enhanced testing is not a golden bullet.  Even weekly testing allows time for a worker to be infected and to spread the virus before their next test.  And testing results regularly in false negatives.  Again there are shades of grey and wriggle room through which the virus may escape.

To make us completely safe we would have to seal tight our borders, have no further physical contact with the outside world and hunt down remaining cases mercilessly.

So kiwis make your choice.  Say no to whanau members coming back, and no imports of any sort, or accept that we have to accept there is some risk and we need a backup system.  And from time to time we are going to have to scramble.  And cross our fingers.

And here is the thing.  This virus has successfully brought down the most well resourced and technologically advanced nations in the world.  In particular the United States, which has suffered because it has an idiot in control, but also China, which in its particular way has thrown everything against the disease and has managed to contain it, but at considerable cost. New Zealand’s response has been outstanding and I hope that eradication can continue.

National has been like a pig in muck running down the country’s Covid response,  They also think, Trump like, that the media is biased against them.

Brownlee recently sent out a fundraising email that contained this text:

[On Monday] it was confirmed that the General Election will be delayed until Saturday 17 October. Given around a third of the population is under a strict level 3 lockdown, this was the right move to make.

But with endless wall to wall coverage, the deep resources of government, and a favourable media, it is hard for anyone not to see Labour have the cards stacked in their favour.

We need to change that.

I went looking for this favourable media and struggled to find it.  I found this article in the country’s foremost paper where the Government was compared to the North Korean Government.

It is as if reality does not matter to this writer. 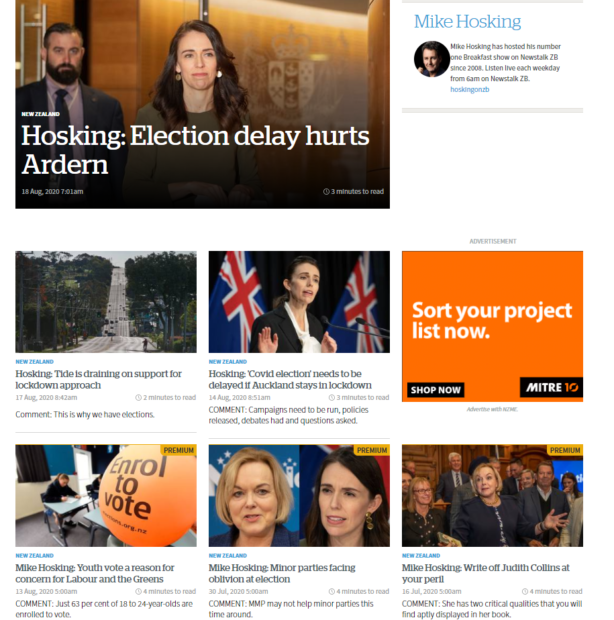 So Brownlee’s claim that the media is biased against National is strange, and verging on conspiratorial.

Brownlee was asked about his media comment and chose to rebroadcast his earlier conspiracy theories.

From Amelia Wade at the Herald:

National’s deputy leader Gerry Brownlee has again batted away suggestions he was stoking the flames of conspiracy theories with his “interesting facts” comments last week.

But then raised the same “facts” he was criticised for, including why Ashley Bloomfield publically got a Covid-19 test.

“Well I just think that it’s interesting that the man at the top of the tree was, at 102 days of clear, suddenly wanting to get tested,” Brownlee said this morning.

He gave a typical Brownlee apology and said he was sorry if we had misinterpreted his comments. Get that he is sorry that all of us got it wrong.

“I’ve said that’s unfortunate. I’ve said I’m sorry people have taken it as being some kind of conspiracy accusation, it was never meant to be like that,” he said.

“I totally reject any idea that I’m a conspiracy theorist or anything other than that.”

He also stood by his allegation that the media were biased against him. Clearly in his view nothing but abject obsequiousness towards National by the media is acceptable to him.

Politics is in a pretty ugly situation right now. The country is nervous at the prospect that our defences against Covid may not hold. For a while National has chosen the corrosive response as opposed to the cooperative approach to the virus. Collins and Brownlee are in full campaign mode, an election period must be the worst possible time for a democracy to handle a potential pandemic. But Brownlee in particular is out of control and the sort of tripe he has been saying needs to be responded to vigorously.

The sooner this election is out of the way and the sooner our elected representatives can get back to working on eradication the better.

113 comments on “What does Judith do about Gerry? ”