What happened to the Newshub article about Nick Smith and the Pike River film? 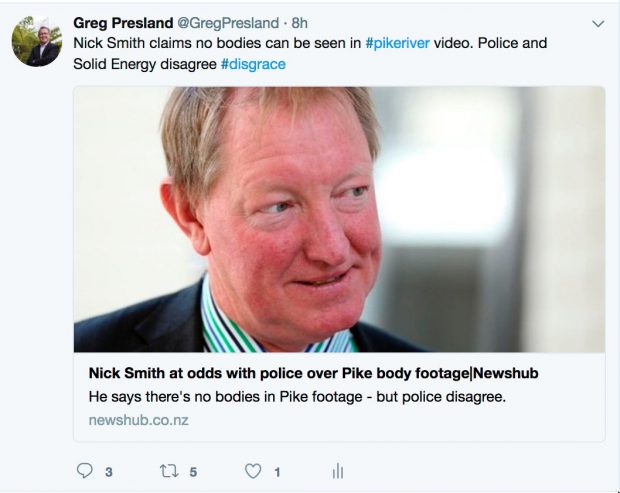 The Newshub article seemed straight forward enough. Nick Smith had yet again been caught out directly contradicting reality. He had said that there was no film showing any Pike River bodies when the police and Solid Energy said there was.

But then the article disappeared. Why did that happen?

The article said (from googlecache):

The minister in charge of Pike River Mine is at odds with both police and Solid Energy over whether video footage from inside the mine shows a body.

Nick Smith said he asked police whether the footage exists, and claims police said it didn’t.

“My advice from police is that they have had specialists look all the way through the video imaging and they have not found any evidence that would confirm bodies in the mine,” he said.

But police told Newshub there is a body that can be seen in some of the footage.

“It is widely known that footage taken from within the mine has potentially captured an image of a body,” a police spokesman said.

“Police has viewed all the video and still imagery we supplied to the Pike River families and hold the view that only one body has potentially been captured.”

The article is still on MSN.  But not on Newshub.

Did the police actually say there was film showing a body?  This is pretty likely as they have in the past.  They deny that bodies are shown but have acknowledged in the past that a body has been seen on film.

This article also states that Solid Energy chief executive Tony King has said he was aware one body had been seen on video footage, but not that more bodies might have been seen.  There is also this OIA request where the applicant was given the run around in his attempt to obtain copies of the video.

The Nick Smith quote above seems pretty clear.  And it directly contradicts what the Police and Solid Energy have said.

So why did Newshub pull the story?  And why did Nick Smith directly contradict what the Police and Solid Energy have said.

41 comments on “What happened to the Newshub article about Nick Smith and the Pike River film? ”