What is up with National?

I put up a late post yesterday about National’s very bad day in the house.  I have not seen them so rattled and uninspired.

But it was not only me.

Looks like the opposition have taken the night off. The House has passed a whole week’s worth of legislation in a few hours today. Excellent stuff.

So the question has to be asked, what is up with National?  Where has that born to rule swagger gone, that insistence that they are right and we are just mindless eco freaking communists?

It might have been the realisation that Jami-Lee Ross is in it for the long haul.  He delivered a letter yesterday suggesting that he was going to sit tight. 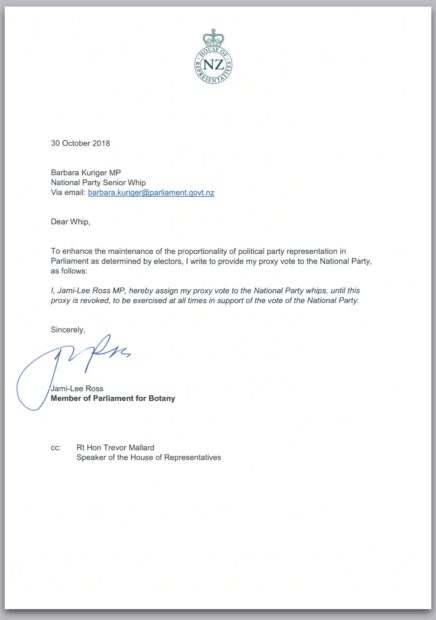 He is clearly trying to preserve proportionality so that National then does not have an excuse to use the waka jumping legislation.

The problem is it appears that proportionality has already been affected.  In the Huata decision Chief Justice Elias said this:

I am of the view that the scheme of the statute is that the proportionality of party political representation in Parliament is distorted when a member continues to serve in Parliament after ceasing to be a member of the political party for which he or she was elected. The relevant distorting “conduct” of a member is not properly to be equated to voting conduct in the House because the statute itself identifies cessation in membership of the party as the distorting condition which gives rise to vacancy if the statutory procedures are invoked.

So the fact he has left caucus may be enough.

Legal guru Andrew Geddis thinks that if the power is invoked Ross is gone.  He sets out the problem for National in this passage:

In a nutshell, so there is no confusion, the necessary legal preconditions exist for Bridges to begin the process to use the party hopping law against Ross in order to force him from the House. If more than two-thirds of National’s caucus are prepared to perform a gymnastic political backflip of Olympic gold medal level standard, he can do so. I doubt he will do so – but then again, all I know about is the law. Politics is far weirder and scarier.

Process wise Bridges has to give Ross 21 working days notice, consider his response and then decide to put it to a caucus vote.  A two third majority of caucus is required on the motion to expel.  Notice is then given to the speaker and it is all over.

But will Bridges get a two third majority of his caucus?  My sense is that it is touch and go at best.  National went way too far with its “principled” opposition to the waka jumping law change to expect that it could then use the law with no one noticing.

So the options are either use the law and be branded as hypocrites or do nothing and let Ross attack National for the rest of the term.  There do not appear to be other options.

And it may be that there is further turmoil within National’s ranks.  It cannot be a very happy place right now.

This particular tale of woe is going to drag out for a while.  And I suspect a few careers are going to be irrevocably changed because of it.