What the polls actually show

‘National’s made a complete cock-up of this and everyone’s pissed, but it doesn’t seem to be hurting them in the polls, where they’re still strong’. You can find that stereotype sentence in the media all the time, particularly in the coverage of the weekend’s National Party conference. But it might be time to do some fact-checking, because they are being hurt in the polls.

Here’s how National has polled in the past year, with the election result as a comparison to check the accuracy of the polls. 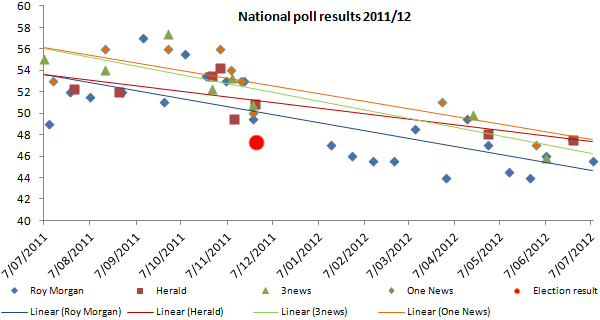 The polls appear to overrate National by a long way. Not one of the 30 polls conducted in the four months prior to the 2011 election had National as low as it got. They averaged 53% – 5.7% more than National got. Even if you allow for the noticeable decrease in the last two weeks thanks to the Tea Tapes, the polls were still far to generous – the last day polls averaged 50.3%, 3% too high, which is statistically significant – the chance that all four polls would be between 2.2% and 3.6% too generous to National if they were accurately registering National’s support in the population is minute.

The trend lines are interesting too. They show National losing 0.017% to 0.027% of the vote per day over the last year (0.5% to 0.8% per month, in more accessible terms). The Herald is the outlier here. The others all have basically the same angle of descent for National’s support, and it works out at about 9% per year.

So, this mantra that is being blindly repeated that events aren’t hurting National in the polls is wrong. All the polls that over-rated National’s support by a crucial 3% at the election are now showing it down too low to form a majority for most of its agenda – remember that ‘easy victory’ actually leaves the government with a one-seat majority on many issues (and the holder of that seat could be in jail this time next year). If they’re still overrating it, then things are even worse for National.

A bit of Maori-bashing isn’t going to fundamentally change the direction the tide is heading. And there’s plenty more bad, vote-sucking news for the government to come over the next to years (if the government lasts that long).

No wonder John Key is getting so grumpy and National is going so negative with its silly ‘Planet Labour/Planet Green’ line. I don’t know what planet the Nats are on, but it’s experiencing rapid climate change.

21 comments on “What the polls actually show ”