What’s the future of Working for Families? 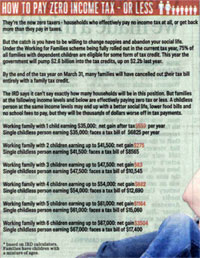 One consquence of the expectations around tax cuts is an examination of some of the policies already have in place – Working for Families for example.

This was the topic of a recent article from Ruth Laugesen in the Sunday Star Times.

“Coopers chairman John Shewan said that under Working for Families, many households effectively paid no tax at all.” (See table to left – click to enlarge).

So how does this “no tax” situation sit alongside what National plans to deliver? Is the roll-over of Working for Families the next dead rat for Mr Key? The ground appears to be being prepared for this “no change” outcome according to comments from Lockwood Smith in the SSTimes article. At first it reads like standard National avoidance of a policy position:

But further into the article Dr Smith goes onto say:

Dr Smith: “Clearly we won’t be dispensing with Working for Families or anything like that. I wouldn’t for one moment say the tax treatment of people with dependent children is unfairly generous.”

So is it reasonable to expect National to just adopt the Working for Families policy “as is”? Unfortunately previous criticisms of the scheme raised by Mr Key do imply that there will have to be change as some point:

Key: “National doesn’t support the current Government’s “Working for Families’ package… Policies that turn every second family with children into state dependents might be a result the Labour Party is comfortable with, but simply put, National is not.’

Key: “I personally think, of Working For Families, it seems far too high up in the income bracket… I think you should use the tax system where you can….”

And when debating legislation that extended Working for Families in 2005 (Hansard, November 16, 2005):

Key: “I want to finish by talking about the Working for Families adjustments… National members will be opposing this legislation with every bone in our bodies.”

But fortunately he has told us they will be clear about their intentions:

Key: “We’re not going to go into an election without complete and clear transparency of how we’ll handle everything from Working For Families, KiwiSaver and tax but we’ll do that within plenty of time” (RNZ, 23 May 2007)

So as we move toward announcements regarding tax policy it is clear that we should also be seeking guidance on future directions for Working for Families.

Perhaps someone should let Lockwood know.

13 comments on “What’s the future of Working for Families? ”