Over at Wheelers corner in the Manwatu there is this rather classic post about a conversation overheard in a cafe.

Marton is a small place and I had stopped for a short break after visiting Hunterville. The café was small but made a good brew. Two guys were sitting with a dark suited chap who had his back to me. Their conversation went something like this:

“So there you go Rangi there is not much I can actually do”, said Mr. Suit,
“It stinks”, said Rangi.
“How do you feel Bob” asked Mr. Suit to the other chap.
“You want the truth”, replied Bob.
“Yes”, said Mr. Suit in a very nervous manner.
“I agree with Rangi, it stinks, it smells like dead rats and I think its crap”, said Bob.
“I can understand you saying that but times are tough and we all need to pull our belts in”, said Mr. Suit.
“Come on, interrupted Bob. You just quit your job after twelve years, you get a huge pension, free travel and a bloody sight more, and you tell us we have to tighten our belts, our belts are already so tight we can hardly breathe”.
Silence reigned supreme and I wondered where this discussion would end, well it never took long for me to find out.
“So there is nothing you can do”, asked Rangi hopefully.
“Not really”, the suit answered
“So we just have to take a 15 to 20% wage cut and say nothing”, said Bob
“Looks like it”, answered the big fellow in the dark suit.
“So you agreed with smiling John Key when he suggested wage cuts”, added Rangi.
“Did he suggest that? I never knew that”, suit responded.
“Bloody oath he did and our bosses took him up on his offer”, said Bob. 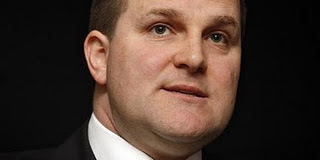 Just at that moment a man in a dark uniform entered the café and said to Mr. Suit, “Your car is here Sir”. Mr. Suit stood and went to shake hands with Rangi and Bob, they waved him away. Seeing his face I recognised him…Simon Power [pictured] Minister of Justice, the Nats whiz kid, future Prime Minister, retiring MP for Rangitikei.

Bob and Rangi were two of the hundreds of locked-out meat workers living in the Rangitikei because they wouldn’t agree to a 15 to 20 percent reduction in wages. Not for them a dark suited driver, a pension after 12 years, automatic wage increases, and free tickets to the rugby world cup…etc…etc