Where is National’s economic plan? 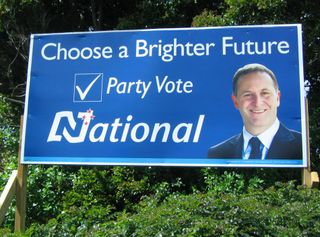 I’ve been talking to a few jokers in political circles since the Government’s spectacular u-turn over mining, and the question everyone seems to be asking is “where is National’s economic plan?”

After all, this is a party that came into power promising to bring about a “step-change” in economic growth and close the wage gap with Australia. A party that relentlessly attacked Clark and Cullen’s management of the economy and promised a brighter future and fatter wage packets. But these were promises born out of vague ambition and empty phrases that tested well on focus groups. There wasn’t any plan, as such, in National’s manifesto.

We saw an insight into this at the Job Summit, where John Key announced that his response to the greatest financial crisis since the Great Depression was to build a cycleway the length of the country. This would create 4000 jobs over two years, he promised. To date there are only 70 jobs, just 10km of track.

But joke projects aside, it became increasingly clear as this year wore on that National’s longer-term economic plan, such as they had one, could be summed up as “tax cuts and mining”. The tax cuts, according to the right’s voodoo economics, would improve incentives and liberate the private sector, while the mining would unleash a bonanza of billions and kickstart New Zealand’s economic growth.

With mining in national parks now out of the picture, you’ve got to ask. Is National’s plan now limited to trying to grow the economy by cutting taxes and slashing public spending? Perhaps John Key’s planned employment relations reforms are the key. Does National think making people less secure in their jobs and giving the unions another kicking is going to create an economic “step-change” and lift our wages to Australian levels?

Honestly, I’m baffled. Over to you. Does anyone else know what National’s economic plan is?

106 comments on “Where is National’s economic plan? ”