Who blew the Budget?

As part of the Nats’ pre-Budget framing, English’s mate Farrar is running graphs meant to show a blow-out in spending under Labour. Problem is, he hasn’t adjusted for GDP growth, or even inflation. How dumb does he think we are? 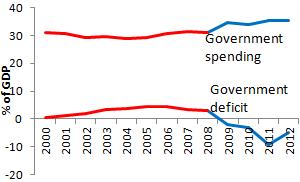 It wasn’t Labour that crashed the budget. It was a National government that decided it would be a good idea to borrow a billion a year for tax cuts and another billion a year for highways to nowhere, while adding 80,000 people to the benefit queue at an annual cost of a billion more.