Who is behind the New Zealand Initiative? 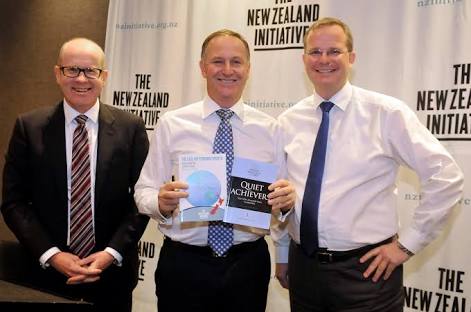 Recent media has been marked by the New Zealand Initiative’s attack on the prospect of a sugar tax.  The proposal has been rubbished and the claim that there is overseas evidence that it works is disputed even though it is that compelling that David Cameron’s conservatives have decided to impose one.

The report is written in semi academic language but has a clear bias.  The conclusion is inevitable given the report’s starting points.  It says that it unashamedly takes “liberty” as a starting point and it claims that “paternalistic regulations” need scrutiny.

The report’s analysis suggests a very high threshold.  The benefits that income from a sugar tax could create are ignored.  And it expects compelling proof that a sugar tax will work before one is introduced.

This is a tough call.  Normally you have to introduce a measure to see what effect it has.  Expecting proof that it will work before it is introduced would normally mean that it will never be tried.

And the one size fits all approach ignores the endless variations of effects that a sugar tax will have on individual humans.  For some it will be a strong incentive to reduce the consumption of sugar, for others not so much.  But if it works some of the time then it should be considered.

This publicity spiked my interest.  Who is behind the New Zealand Institute and how is it funded?

Its website suggests there are at least eleven staff with some impressive CVs amongst them.  There is no sign of support staff and I presume they are also employed.  It must cost quite a bit of money to keep the organisation going.

The NZI claims to be neither left wing nor right wing but it proudly prefers “Adam Smith’s invisible hand to government’s visible fist”.  It is the successor of the Business Roundtable which was created during the height of Rogernomics by founders who eventually formed part of the Act Party.

There is no sign of any financial records.  For entities who insert themselves into public policy debates financial transparency should be a requirement although the board makeup clearly denotes in general terms how it is funded.

The incident highlights a problem for the left.  There really is no equivalent progressive think tank.  When you think of other entities such as the sock puppet Taxpayers Union there is definitely a weighting to the right.  The strongest voices on the left tend to be dedicated amateurs or academics with Gareth Morgan’s foundation providing interesting and quirky and occasionally left wing commentary and analysis on issues.

And if you want to understand how important the issue of balance is then consideration of the treatment of Climate Change provides a perfect example.  A recent Guardian article highlights how poorly the UK media has handled the issue.  And we are not talking about marginal rags.  We are talking about the Times Newspaper.

The Times newspaper has been criticised for “poor quality” and “distorted coverage” of global warming by a group including some of the UK’s most eminent scientists, the chair of the government’s official advisers on climate change and a former chair of oil giant Shell.

“If you lose trust, you lose everything; and on this issue, you are losing trust,” said the group, in a letter to the Times editor, John Witherow, seen by the Guardian.

The group says the Times’s coverage: “appears designed systematically to undermine the credibility of climate science and the institutions that carry it out, and the validity of programmes aimed at reducing emissions.”

“Climate science has proven remarkably robust to repeated scrutiny, and multiple lines of evidence indicate that climate change and ocean acidification pose serious and increasing risks for the future,” the group says. “There is abundant evidence also that decarbonised energy systems can provide energy security at reasonable cost if they are properly planned.”

This issue also revolves around the use of a private organisation, the Global Warming Policy Foundation.

The GWPF is a thinktank led by former chancellor and climate sceptic Lord Lawson, and regular Times columnist Viscount Matt Ridley is a member of its academic advisory council. “It would be deeply perturbing to find that a paper as eminent as the Times could allow a small NGO, particularly one whose sources of financing are unknown, a high degree of influence,” says the letter to Witherow.

By all means these debates should occur.  But as a minimum if a private organisation attempts to control and dominate a public policy debate there should be full disclosure on how it is funded.

201 comments on “Who is behind the New Zealand Initiative? ”