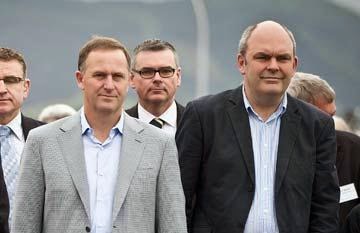 The exodus of National MPs from Parliament appears to be picking up pace.

First of all Bill English went quickly, despite public comments from within the National Party that he could remain as leader for as long as he wanted. His sudden resignation suggested that a tipping point had been reached within National’s caucus and he saw that the writing was on the wall.

Then suddenly Steven Joyce went. A week ago he wanted to be leader of the party. But yesterday he decided to bail out with all the usual platitudes about spending more time with his family.

And the day before he was that protective of his reputation he threatened to sue the NBR the one media outlet above many others that is pro National.

Of course the position Joyce was offered have nothing to do with his decision to change careers. None whatsoever.

And the question arises who will be next? Who else will decide that they do not want to hang around, giving brave speeches in Parliament and then taking part in losing votes.

A few names spring to mind. David Carter must be ready to go. Gerry Brownlee must be counting the days especially as news breaks that the deal the Government signed to rebuild Christchurch was even worse than everyone thought. Chris Finlayson must be thinking of a more lucrative role in the law. Nick Smith must realise that his days are numbered although whether or not he has the opportunity of an alternative career may be a significant issue. Nicky Wagner must be thinking of leaving soon. There are a number of MPs who could disappear at any time.

And National is preparing for this.  From Anna Bracewell-Worrall at Newshub:

Mr Bridges said today there will be more resignations. He said he doesn’t expect many, and doesn’t think they will come as a result of his upcoming shadow cabinet reshuffle.

“Over time you will see retirements, but I don’t think there’ll be a lot. In terms of this reshuffle, I don’t think you’ll see that,” Mr Bridges said this afternoon.

The reshuffle is likely to see some younger MPs elevated to the front bench and in the toss and tumble, some of the more senior, experienced MPs will be relegated to the back benches.

If they don’t like that, they could well choose to retire.

Mr Bridges has indicated numerous times that he will bring generational change to the caucus – and has said that partly means new faces.

He repeated that on Tuesday, saying, “The reshuffle’s going to be an exciting blend of real experience, and we’ve got so much of that, and also bringing fresh talent through.”

As for whether Mr Joyce’s resignation is an act of petulance in response to his demotion from the finance portfolio, Mr Bridges said that’s not the case.

“Not at all. I think Steven feels he’s at a crossroads, and he feels that he has a wonderful young family and plenty of ability to get out in the commercial sector and do well.”

And there are some interesting people ready to become MPs.  Next in will be Nicola Willis whose public reputation appears to be sound.  After that is Agnes Loheni, a token Samoan candidate who thinks that it is important for the Government to provide more transitional and emergency housing.  What a complete lack of ambition.  And then Paulo Garcia who is opposed to the concept of recreational fornication.

Whatever happens National has lost a great deal of experience over the past 18 months including arguably its three most senior MPs.  If the polls start going south then things will get really interesting really quickly for Simon Bridges.