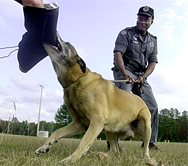 The Army has said it doesn’t want to run National’s boot camps – they prefer to train people who actually want to be there. So the question now is who do they plan to get to do it? They’re not saying much at the moment, but Key’s new policy does leave the door open for the Tories’ other pet project: private prisons. Surely the same outfits must be in the running to operate John’s bootcamps?

The firm the last National government contracted to run private prisons in NZ was none other than the infamous Wackenhut, although they’ve since changed their name to GEO Group, so damaged is their reputation.

Especially for young people, Wackenhut has become a byword for inmate abuse including high profile stories of rape and brutalisation of young people.

Wackenhut CEO George Zoley said after a CBS Television report exposed the repeated rape of a 14-year-old girl at a Wackenhut juvenile jail and two guards were found guilty, ‘It’s a tough business. The people in prison are not Sunday-school children.’

John hasn’t told us yet who he plans to put in charge of his boot camps, but I think it’s time he started giving us some answers.