Why can’t the Right face the manufacturing crisis?

The NBR (motto: ‘our circulation’s falling at 12% per year’) and the Right blogs are all aflutter after supposedly proving that Russel Norman is wrong and there haven’t been 40,000 manufacturing jobs lost since 2008. NBR’s Rob Hosking claims the number is only 10,000-20,000. Because, you know, that would be OK. But the truth is, Norman’s right – 40,000 manufacturing job losses since June 2008.

Here’s a wee graph of the number of jobs in the manufacturing sector: 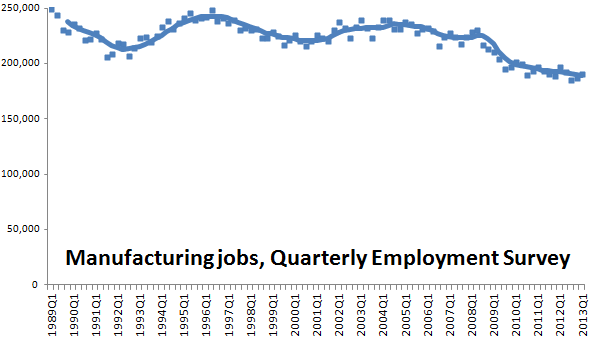 Note the sharp fall during the economic crisis hasn’t reversed during the ‘recovery’. In fact, the trend is still down. The number of jobs in the manufacturing industry is now the lowest on record. 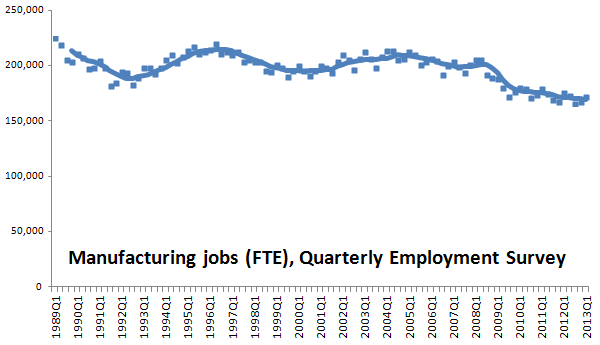 But Hosking has another trick up his sleeve. The Household Labourforce Survey shows the number of people employed in manufacturing. 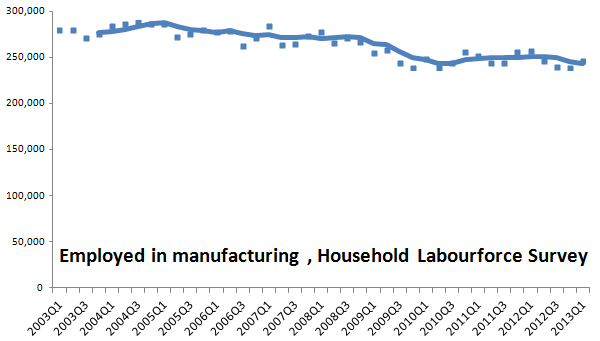 Whoops. Again, the big drop-off and no recovery.

Even Hosking’s different series – that don’t relate the the 40,000 manufacturing jobs lost figure that Norman has been using – still show that a huge decrease in work in the manufacturing sector has occurred. However you cut it, four years after the recession ended, there is no recovery but, rather, further decline.

Well, that’s all fine and dandy isn’t it righties?

Because, just as with reforming the broken electricity market that National created, the answers to the problems challenge the very basis of the Right’s neoliberal economics. And that model has made a few people (including the few remaining readers of the NBR) very wealthy even as they’ve made the rest of us and the country as a whole poorer.

They can’t acknowledge the problem, because the solution means an end to their privilege.

117 comments on “Why can’t the Right face the manufacturing crisis? ”