Why does John Key want to sell Air NZ? 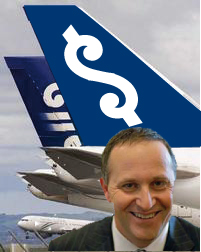 This morning Air New Zealand announced an annual profit of $268 million. The New Zealand public owns 80% of the national carrier, which means a good chunk of that profit is ours to spend on things like health, education and family tax credits rather than filling the pockets of some overseas shareholder.

So why then does John Key want to flog it off to overseas interests? Here he is in the Independent Financial Review (offline) on January 24th saying a National Government would sell our stake to Singapore Airlines or Cathay Pacific:

LARGE Asian carriers Singapore Airlines and Cathay Pacific would be a natural fit to either take over or buy a chunk of Air New Zealand, says National Party leader John Key. Key said yesterday he was indifferent to the size of the Crown’s 80.1% stake a National government might sell… “In a world where there is likely to be greater consolidation Singapore Airlines and Cathay would be a natural fit.”

Let me get this straight: Air New Zealand is returning the New Zealand public a dividend of more than $150 million a year, and John Key wants to sell it into foreign hands? I knew National was still kinda hot on privatisation, but this is just ridiculous.

One comment on “Why does John Key want to sell Air NZ? ”