Why unions won’t give up on Fair Pay Agreements 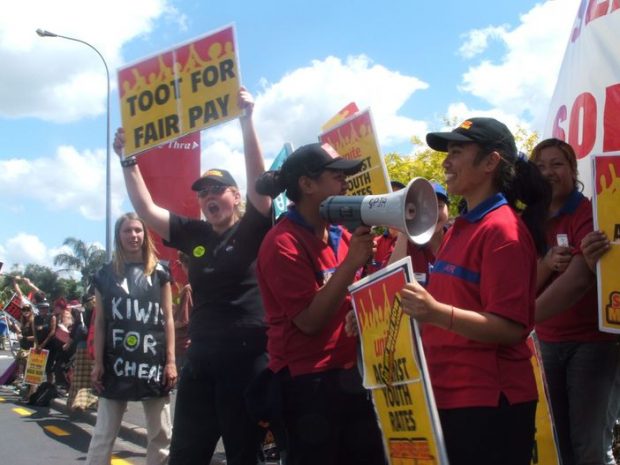 Fair Pay Agreements are in the news this week as the CTU calls for progress on this, and some media suggest that there is a developing rift between Labour and Unions.

Fair Pay Agreements as Labour Party policy have been fought for by Affiliated Labour Unions since 2014.  Originally called Industry Standard Agreements, and driven by Helen Kelly, there was comprehensive policy adopted by the Labour Policy.

Helen Kelly often made the case by comparing the situation of a Four-Square worker in Kaitaia and how difficult it was for her to join a union and become part of collective bargaining under our current (despite amendments) employment legislation.

Since then, there has been a Working Group report led by the former PM Hon Jim Bolger, who has reflected and quite bravely owned up to the impact of the policies his government introduced in the 1990’s with the Employment Contracts Act and welfare attacks.

The case was well made out in the Working Group’s report and has been repeated elsewhere, even in the OECD and IMF who have noted that New Zealand has one of the lowest levels of collective bargaining (and as a consequence, high inequality) in the OECD.

Predictably, the Business Sector has opposed the idea of improving standards in industries for those who are most likely not to have collective agreements or be able to join unions. They continue to maintain that any improvements that will increase the share of the wealth workers provide have are “1970s or 1980s.”

Yesterday a Discussion Paper was released.  It recognises that wages need to be lifted and the economic system is failing many workers and that Fair Pay Agreements will help fix this.  There are some areas of concern that have entered the dialogue, such as a market test, increases to thresholds which will create more hurdles, and non-union representation.

While we’re frustrated that yet another layer of delay has been added with the consultation document, unions will never give up.  My experience as a union fighter is that it sometimes takes years for unions win, but we do and we have.  Think four weeks annual leave, paid parental leave, health and safety, minimum wage etc,

Fair Pay Agreements are an essential part of a fair economy.  It’s just not good enough to bury our heads in the sand and pretend that everyone is better off.  They’re not.

Meanwhile, the CTU has launched this campaign to ensure there is feedback from working people on the Fair Pay Agreement consultation document.