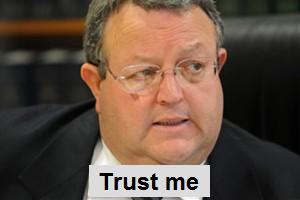 This Government has three different techniques when it wants to bury adverse news. For run of the mill reports they are released on the Friday at the beginning of a Parliamentary recess period. For bad reports they tend to dump them on days with other notable news events happening. And for the really bad reports they wait until just before Christmas.

By this measure the report into Gerry Brownlee’s breach of security at Christchurch Airport is a doozy.

It was originally going to be released on the same day as the announcement of the new Labour Party leader. Even then John Key expressed surprise at how long it had taken. Stuff reported him as saying this:

Mr Brownlee was advised today and so I’m sure there will be a statement tomorrow … don’t forget it’s got nothing to do with us. We are actually amazed that it’s taken as long as it has. I mean, it’s two months since the election.”

Key’s amazement should by now verge on incredulity.

The decision that Brownlee had been fined $2,000 for the security breach was announced at the time but the report was not released. Some commentators expressed surprise, after all according to Brownlee’s explanation the door was opened for him by the security officer and the definition of the infringement he had been charged with had a defence if Brownlee entered the area with a boarding pass and with the intent of catching a flight.

This morning’s Dominion Post refers to the now released report and has the following passage:

The airport employee “decided to swipe his security card to release the door, open it and explain to Mr Brownlee and his associates that they could not enter the sterile area using that door and would instead have to proceed to the security screening area”.

By the time the airport employee got to the door, one of Brownlee’s aides had already pulled the security door open, something Brownlee has never revealed before. The three then walked through the door.

The airport employee claims Brownlee then said “sorry to do this but we’re in a hell of a hurry”.

The report adds that the trio then walked passed him.

“Mr Brownlee and his aides considered [the airport employee] had agreed to, or at least acquired in, their entry through the Koru exit door” although the officer “does not accept that”.

When the events came to light, Brownlee told reporters that he had not barged passed security.

“No I didn’t barge past security … I went through a door that I shouldn’t have gone through,” Brownlee said.

“We knocked on the door and I said to the guy ‘we’re in a terrible hurry, can I go through here?’ He said ‘okay‘.”

Someone is telling fibs. My bet is that it is Brownlee.

The report is apparently heavily redacted. I have not been able to find it either on the CAA website or on the Beehive website.

The disclosure raises an issue about why Brownlee was treated in the way he was. Section 54 of the Civil Aviation Act 1990 makes it an offence to refuse to leave a security area. If the Security Officer was able to tell Brownlee to go then he should have been charged with this offence which is theoretically punishable by a jail sentence.

The event reinforces the well earned perception of National arrogance, that the rules do not apply to them and they enjoy privilege the rest of us do not.

The timing of the release and the redacting of the report raises serious questions about the CAA’s independence. And Brownlee should have been fired as a minister. After all John Key said in 2008 “I expect high standards from my Ministers … if they don’t meet the standards I set then obviously I will take action if necessary.”

49 comments on “Why wasn’t Brownlee sacked? ”