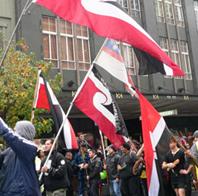 As I said last post, National’s foreshore and seabed offer cannot be acceptable to the Maori Party.

The Maori Party was established to win the right for iwi to have what they believe are their rights to use the economic potential of the foreshore and seabed. In particular, iwi want aquaculture and mining rights. They don’t want to have to get licences for those activities on what they see as their land as if it was public land.

National’s offer does not meet those requirements. It explicitly says iwi will be able to have customary rights in government delineated areas, like traditional seafood collection, recognised (as they can now) and will be able to veto coastal consents for things like mining and aquaculture (you don’t have to be a fortune-teller to see that’s going to lead to some racial disharmony when Pakeha companies get vetoed by iwi who go ahead and do the activity the Pakeha company wanted to do) but Maori won’t be able to do mining or aquaculture themselves on the foreshore and seabed as of right – they’ll have to get permission from government, which is the problem right now.

The Maori Party is clearly unhappy, particularly Hone Harawira who called the offer “dumb” but will they fold?

The Maori Party’s last minute decision to side with democracy and vote against the Government’s dictatorship in Canterbury only hours after the foreshore and seabed proposal came out looked like a flash of real anger.

But then there was Rahui Katene’s bizarre patsy question to the government on the foreshore and seabed the next day. That looks like a sign the leadership will fold.

If they do, they’ll be abrogating their party’s entire raison d’etre. It’s not enough to get consultation or the ability to go to court to win government-limited rights. Being told no respectfully isn’t any different in substance from what they got in 2004. Contrary to what some on the Right seem to think, Maori are not mystical savages who just want a insubstantial spiritual connection to the foreshore and seabed acknowledged within Pakeha law. They want to be able to be awarded real economic rights.

If the leadership folds on this one they’ll surely break the party between the captured leaders in their Crown limos who are happy to take trinkets as long as they can keep their jobs and the bulk of the party, which wants real control of land they say belongs to them and the economic potential it represents.

12 comments on “Will Maori Party stand firm on foreshore & seabed? ”