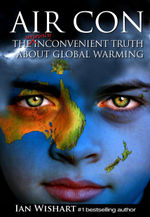 This is just too funny. One of Ian Wisharts sources in AirCon which he quoted from ‘verbatim’ turns out to have been a kiddies resource from 1999 – which he still mis-interpreted.

Gareth at Hot-topic has been tearing apart some of Wisharts recent posturing, and posted this comment

Wishart, responding to some prodding, says this in a comment at his place:

Thermal lag was defined as a response time. The full details are quoted from US National Science Foundation reports, verbatim, at pages 96-98 of Air Con (and Gareth incidentally still fails to understand what they are saying the same way as he misquoted a SkepticalScience page in support of one of his earlier arguments.)

Sigh. Sadly Rob I understand more about the science of climate change than you or Gareth will evidently ever know but don’t let that stop you frothing at the mouth, it’s highly entertaining.

We’ll ignore his arrogance for the time being and concentrate on the ‘US National Science Foundation reports’ he relies on in Air Con (though there it’s described as an ‘essay’). Luckily for us, Ian provides a link to his source (footnote 155 on p96), which he notes is from 1999 and only available as a web archive. It’s a long link to type in, but it does work, as you can see. I was a bit surprised, because it doesn’t read like any scientific report an august science funding body like the NSF might issue â€” in fact it reads more like the sort of notes you might provide for a middle school educational programme. So I clicked a few links and Wishart’s NSF report turns out to be this:

GLACIER brings the exciting, dynamic realm of Antarctica into the middle school classroom to promote exploration of earth science concepts. GLACIER is a hands-on, inquiry-based, multidisciplinary cooperative learning adventure that explores topics being investigated by researchers on the ice today!

Not a ‘report’, but a ‘multidisciplinary cooperative learning adventure’. There’s some irony perhaps in that Ian uses a 10 year old US middle school course as his reference, and still fails to understand it. Made me laugh, anyway.

But where does the National Science Foundation come in? Turns out they funded the course:

GLACIER is a three year project funded by the National Science Foundation branches of the Office of Polar Programs and the Directorate for Education and Human Resources. It involves a diverse team of researchers and educators headed by Rice University of Houston, Texas, the Education Development Center of Newton, Massachusetts, and the American Museum of Natural History in New York, New York.

Now that is priceless but it does conform to the my general impression of Wishart and his work. Written by a nasty little child to provide cover for those too lazy to use their brains. In fact it is a ‘con’ by Wishart displaying his middle school reading.