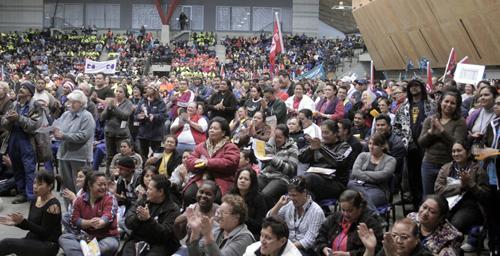 6000 workers turned out in Manukau yesterday for the EPMU’s Wages Drive rally. With 25 events nation-wide over this month, which have attracted crowds from several hundred in little old Blenhiem to thousands in each of the cities, this is the largest series of political rallies in New Zealand this parliamentary term.

The EPMU reports Manukau’sTelstraClear Pacific Stadium was full to overflowing. Members voted unanimously to endorse the Work Rights Checklist, which sets out provisions workers expect in a party’s work rights policy including:

â€¢ The right to organise as a union and to bargain collectively for decent pay and conditions, including at an industry level.
â€¢ Enforceable rules for bargaining which mean management can’t just refuse to negotiate or can’t bypass the union.
â€¢ Annual and real increases in the minimum wage.
â€¢ The right of workers employed through labour hire agencies who work alongside workers under a collective agreement to be paid the same rates for the same work.
â€¢ An active labour market policy with a goal of full employment.
â€¢ Protection against arbitrary and unfair dismissal and other unfair treatment
â€¢ Strong health and safety laws setting high standards and providing real protection for workers.
â€¢ A fair and efficient system of accident compensation for injury at work regardless of who you work for.
â€¢ Decent holidays, including at least four weeks annual leave.
â€¢ Minimum redundancy protections.
â€¢ Decent paid parental leave to give new parents and their babies a proper start.
â€¢ Government and employers investing in on-going learning around work.

So far, 14,000 union members have endorsed the checklist at the rallies. The final rally is today at North Harbour Stadium.