If you’re a blogosphere regular, you’ll have noticed that recently every monkey with a copy of The Fountainhead and a crush on John Key has been spouting the line that the top 10% of taxpayers pay 71% of net tax. Sounds incredible, eh? That’s because it’s not credible. It’s more cheap numbers tricks from the Nats.

Over at Pundit, Rob Salmond has explained the trick. I’ll take the highlights of his post.

It all starts with Bill English’s table, let’s assume these basic numbers are right, although English hasn’t released his source data: Net tax is the tax people pay minus benefits and tax credits like Working For Families that they get. This is where the 71% figure comes from. The top 9.7% paying $7.8 billion of net tax, which is 70.7% of the $11 billion total net tax. But wait:

What?! How the hell can two separate groups of families each pay 70% of the net tax?

So, this is the trick: English and Farrar have offset the benefit transfers that the poorest families get against the net tax that middle income families pay. If you look it in graphical form, they’ve used the little black bars to fill in the red hole leaving the big black bar untouched: 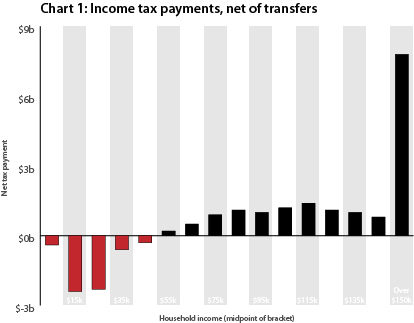 Conveniently, that leaves nearly all the remaining tax being paid by the wealthy. But why do it that way, shouldn’t you just spread the cost of the transfers equally? Of course you should. Salmond points out one of the stupid results of English/Farrar’s magic numbers:

The list of silly conclusions that flow from their calculations is long. For example, under the English/Farrar counting rules, high-income families contribute absolutely nothing, not one cent, towards helping the needy with Working for Families payments, the DPB, or unemployment benefits. This is because their $7.8 billion goes into the “net tax” pool rather than the “paying for welfare transfers to net tax recipients” pool. That is, of course, an idiotic conclusion that is unfair to top-income earners, whose taxes do a great deal to support welfare programs.

It doesn’t make any sense to put all the benefit payments on to the middle incomes. If you and me pay $1000 each in tax and education is 10% of the budget, and we want to know what percentage of your tax went on defence spending, we wouldn’t pretend all my money had paid for other stuff, and say that you are paying for 100% of the education budget.

The correct way to calculate the percentage is to divide a group’s net contribution by the total of all net contributions. Correcting for this error in arithmetic, the net income tax contribution of $150,000+ households falls from 71% to 46%.

Salmond then points out that benefits aren’t funded entirely by income tax, there’s also other taxes like GST, which is regressive: 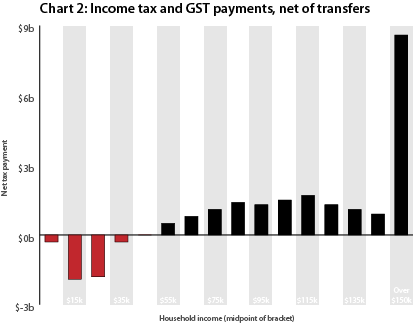 Using these more complete figures, the proportion of net tax paid by $150,000+ households drops further to 43%, a far cry from the 71% touted by English and Farrar.

I don’t think so. Even under a libertarian flat tax regime, this group would pay 30% of the tax. And our country is not a bunch of flat tax libertarians. We have always embraced progressive taxation, and been willing to lend a helping hand to those in need.

We have always known that when you help out people in need, other people pay more than their income share to fund it all.

The fortunate few paying 1.4 times their income share in tax is worthy of everyone’s gratitude. But it does not seem at all an unreasonable burden.

So, there we have it. More dodgy Nat numbers comprehensively demolished.

But I think we need to remember what is behind the dodgy numbers in the first place.

The Nats are desperately looking for an excuse as to why the highest 2% of earners shouldn’t have to go back to paying the 39% rate that they managed to pay for 9 years on income over the “stratospheric” threshold of $150,000 and why people making tax-free capital gains should still be subsidised by the rest of us. And the best they can come up with is ‘pity the poor rich guy’ and some drummed up numbers. Pitiful.