There was an excellent piece in the Saturday Herald by John Armstrong.  A large 2-page spread, fairly prominent in the paper, and not critical of Labour.  Not fulsome praise; just great, unbiased reporting.

Now admittedly I shouldn’t get excited by such things, but the steadily slipping standards of New Zealand’s papers, combined with a media love-in with National at the last election (all singing from the same hymn-sheet: “Time for Change”, without any analysis of change to what…), leaves good quality newspaper  journalism a sight to behold. 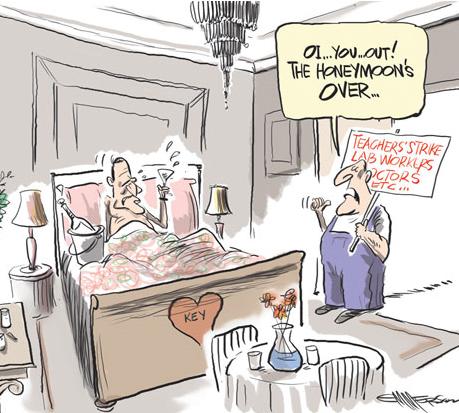 The New Zealand Herald has always been a conservative paper, but has shown a surprising bent of occasional even-handedness of late.  On the whole the editorials are usually still best skipped, even if there is obviously one nameless editorial writer who isn’t indoctrinated; but elsewhere in the paper there have been signs that all is not wedded bliss with National.

It started with National’s Schedule 4 Mining fiasco, that the Herald belatedly “championed” the opposition to.  And maybe they got a little taste of independence.

Not championing Banks in the mayoral race may have been just sensible self-interest in not backing a loser, but also the sweeping victory of Brown may have awakened the Herald to the fact that maybe Auckland isn’t as right-wing as they are.

So the Herald has given the Labour conference a very even-handed coverage.  And has started a new campaign against a National Policy – this time on drink-driving.

I don’t think we should ever expect the Herald to be anything but conservative, but it is nice to see her sometimes thinking again.

(It’s not become all quality though: don’t get me started on the large article about the unscientific poll of a small non-random sample of their readers allowing them to conclude that the public support the PPTA’s wage/condition claims, but not their strike action – that may or may not be true, but that poll doesn’t allow you to conclude anything)