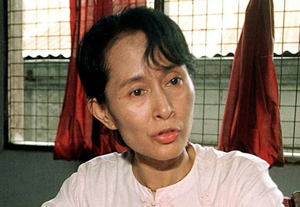 Aung San Suu Kyi is one of my heroes.

Aung San Suu Kyi (b 1945) is a Burmese opposition politician. In the 1990 general election the National League for Democracy (of which she was General Secretary) won 59% of the vote and 80% of the seats in Parliament, effectively electing her Prime Minister. She never took up the position — she was already under house arrest. The results were “nullified”, and the military refused to hand over power.

Despite a sustained international outcry, Aung San Suu Kyi (“The Lady”) has never been properly free ever since. She has been under house arrest in Myanmar for 15 out of the past 21 years, allowed only very limited contact with the outside world. During this time she has remained a fearless and steadfast advocate of democracy, according to some “an icon, a universal symbol of courage, endurance and peaceful resistance, a new Mandela”.

Aung San Suu Kyi has been the recipient of much international recognition, and a host of awards, including the Nobel Peace Prize in 1991 (using the US$1.3 million prize money to establish a health and education trust for the people). She is the world’s only imprisoned Peace Prize winner.

Aung San Suu Kyi may be about to enjoy one of her rare moments of freedom. Since 11th November The Guardian has been reporting:

Aung San Suu Kyi may be about to go free, but for how long?

After 15 years, the Burmese opposition leader is expected to be released from house arrest in less than 48 hours

“It has been a hard life, she has sacrificed a lot. But she is used [to it] now. And she keeps working, waiting for the day she will be released,” said her lawyer. For all of Burma, that day is expected as soon as Saturday which is when, according to U Nyan Win, her current sentence expires “and there is no mechanism under Burmese law to extend that detention, to keep her under house arrest. They must let her go.”

There can be no guarantees from a junta that has detained Aung San Suu Kyi, essentially arbitrarily, three times in two decades, but hints from “unnamed military sources” suggest she will be released. “I have not been told that she will be released, but it is my expectation,” said U Nyan Win …

U Nyan Win said Aung San Suu Kyi’s first act as a free woman would be to address the Burmese people and speak to the media, local and international. “She will make a press conference, she needs to speak to the Burmese people but the world too. This is what she always does.” She also wants to reinvigorate the National League for Democracy, the party she led to victory at the 1990 election but which has since been proscribed by the junta after advocating a boycott of last Sunday’s poll.

All of this is certain to raise the ire of the junta’s ruling generals. On past form, theirs and hers, Aung San Suu Kyi’s liberty could be short-lived. “She never thinks of that. She will do what she needs to do. For her people like before, like always.”

Will Aung San Suu Kyi be released? If so she will always be in danger, and will likely be taken in to custody again soon. Because she will not be prevented from speaking out. One of her most famous speeches, the “Freedom From Fear” speech, begins: “It is not power that corrupts but fear. Fear of losing power corrupts those who wield it and fear of the scourge of power corrupts those who are subject to it”. Go well Aung San Suu Kyi, the world will be watching.