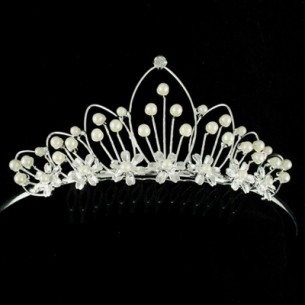 With all the crap this government’s spewing out at the moment, sometimes it pays to take a breath and look at something a bit lighter. Lynn posted a while ago about some of the oddities of the internet, noting how “milk bottle” was one of the most frequent search terms used by visitors to this site. Well gentle readers, the “tiara” is making a comeback – thanks to this piece about John Key’s motives for resuscitating the English feudal honours system. Like the milk bottle mystery, the fetching tiara used to illustrate the post is the number one google image seach for that term. As a result the story is 19th most read story on this site’s stats 😆

So that might seem a bit odd for a political blog, but then it is a very fetching tiara John has his eye on – imagine the touch of class it’ll bring to the next State Barbie.

Yes, the internet makes for some pretty obscure connections. On which note, here’s one of my favourite sites from the ‘Bizzare but Somehow Still Entertaining’ files: Cats that look like Hitler. Yes… there is a website dedicated to ‘Kitlers’ – there are thousands of them, and yes, some of them do quite look like Hitler.

You have to the love the internet for the readerships it can create.