Has the spirit of ANZAC Day become subsumed by the commercial imperative?

How disgusting it was yesterday to see John Key defending Australian Prime Minister Tony Abbot’s branding of the joint Kiwi/Aussie Iraqi venture with the “ANZAC” label. While there are one or two similarities – the Kiwi/Aussie joint force is a small component of a much larger force being run by an overarching imperialist nation, for example – the differences are so vast as to render the “splendid sons of ANZACs” branding little more than war mongering propaganda. That it fits in quite nicely with the weekend’s fear mongering propaganda speaks of co-ordinated effort to gather the hearts and minds of New Zealanders to support this murderous corporate venture to secure oil reserves and maintain munition sales.

But its not just our government which is looking to assist multi-national corporations make profits by employing the ANZAC brand. Earlier this year, Australian banksters at ASB arranged as awful an example of native advertising as has ever been seen. That was pretty cheeky of the ASB because the Returned Services Association had already teamed up with the Australian banksters at ANZ.

Another crew of dodgy Australians looking to profit from ANZAC branding here in New Zealand is SkyCity. WTF? After the way that company rorted itself a prize piece of central-city land and a 30 year licence to print money it now expects us to feel all warm and gooey because its using the poppy image to highlight its penile presence towering over Auckland. Crazy. There’s also various manufacturers getting into the act with special biscuits in special tins and special chocolates with special packaging. There’s even Trelise Cooper special poppy iPhone covers and wrist bands . . . the list goes on and on.

Check out what the Xenu-fearing Scientologists tried on with a fund-raising venture for its Auckland HQ . . . 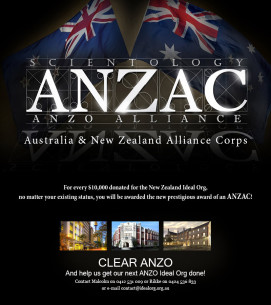 Happily, in the last instance, the Australian RSL got onto this tiny aspect of the much larger Scientology fraud pretty smartly. The Veteran Affairs Minister Senator Michael Ronaldson delivered a well-deserved bollocking last year. His New Zealand counterpart, Craig “Novopay” Foss,  didn’t have anything to say.  Not surprising, really; National Ltd™ has always had a soft spot for chancers on the make, especially when they help out with PR-ing unpopular decisions. Just ask Tony Abbott.

Its all just seems such a shame. Not only are we in a somnambulant march to hand over the freedoms our ANZACs died believing they were protecting, we are slowly replacing a solemn remembrance of their sacrifice and example with more war mongering in subservience to corporate profit making.