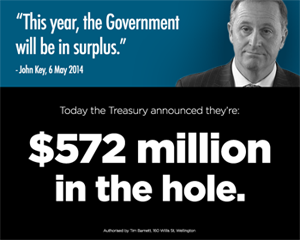 For latest updates [feel free all] see below.

But what was probably supposed to be the centerpiece of the budget has apparently been scooped by details pre-released on a website: “‘Thousands’ of homes could be built on former Crown land in Auckland”. It’s like (ht Scott Milne) KiwiBuild with all the social justice elements removed, see also NRT: “A lot of devils in those details”.

[Update MS] – Looks like Scott Milne is right about Kiwibuild although we will need to see the details.  Labour’s 2012 Kiwibuild policy said this:

Much of the land will come from HNZC buying new land or building on existing developments. Labour will also use public land and look at reconfiguring and subdividing some existing state house land as opportunities arise.

The main difference seems to be that National will be supporting developers whereas Labour wanted to support first home owners.

Update2:  The information is now available from the budget website.

The deficit is $684 million and forecast to be a wafer thin $176 million next year.

There are measures to address child poverty including the following:

But don’t bother with Armstrong’s pathetic: Budget 2015: The give-and-take Budget

[r0b] So – a panicked response to the Auckland property crisis. A welcome (albeit inadequate) adjustment to benefit rates – credit where it’s due for that. In short, public pressure is forcing action on the Left’s political agenda. This is a reactive budget, trying to get bandaids on some of the worst crises, without delivering any kind of long term plan for the environment or the economy (the cuts to Kiwisaver incentives emphasise the short-term focus). There is no vision. As to the criteria that National has set for itself – still no surplus, and no one believes the projected one next year.