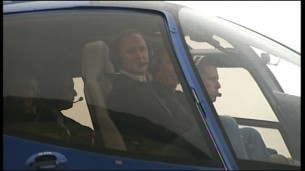 Patrick Gower has more on the helicopter flight that John Key took in 2009 after opening a walkway that Key says was necessary because of mystery ‘security meetings’ that were supposedly arranged that afternoon. The flight cost us $2,000 when Key learned the helicopter was owned by the Velas.

So Key probably didn’t want to be linked to the Vela helicopter if news of the ride got out.

And it would have – Key was required to declare the helicopter ride as a “gift” in the MPs’ register of pecuniary interests.

All MPs are required to put gifts of $500 or more in there. For instance, in the same year Key declared “Bottled Water from Spring Fresh Limited”, and tickets to four All Blacks games.

These are in the Register of Pecuniary Interests 2010 – which requires the declaration of all assets and gifts received in the year to January 31, 2010.

Key’s office told me: “Clearly, this office had received the invoice before the register of pecuniary interests was published, so the use of the helicopter was not treated as a gift.”

So using the taxpayer to pay for it meant Key avoided, in his words, “the risk it could infer some sort of benefit or favour and so my office paid for it”.

Let’s think about the official timeline, described above:
Who really believes that the Velas had some diligent little accountant churning out invoices on New Year’s Eve for a helicopter ride three weeks previous?
Why would it take two months to stamp an invoice? It’s hardly like the PM’s office is busy in January and February – Key and the rest of the ministers are on their extended holidays (with a taxpayer-funded entourage).

Isn’t it more likely that, some time in February, Key realised that the ride should have gone in the gifts register and he would look like a hypocrite taking a free ride from the Velas given they were part of National’s damning of Winston Peters. So, he called up the Velas and said ‘look, bill my office something for that flight, better backdate the invoice to last year’. And the Velas produced the invoice in late February, after which it was processed.

In case you haven’t seen it, here’s Bill English explaining, on behalf of Key, the meetings that Key supposedly would have been late to if the chopper pilot hadn’t happened to offer him a lift:

Hon PETE HODGSON (Labour—Dunedin North) to the Prime Minister: At what precise time and date were the “security related” meetings of 11 December 2009, that he referred to yesterday, diaried?

Hon Pete Hodgson: If he had travelled by car from Hamilton to Auckland, as previously arranged, would he have arrived on time for his security-related meetings?

Hon BILL ENGLISH: It has never been the Prime Minister’s practice to talk publicly about security matters, and he does not believe that it is in the public interest to do so now.

Hon Pete Hodgson: I raise a point of order, Mr Speaker. Straightforwardly, the question was not about the meeting or the content of the meeting. The question has not been addressed. It was specifically about whether the Prime Minister would have arrived in time for the first of the security-related meetings, not what the security-related meeting was about.

Mr SPEAKER: I think the member makes a fair point. The question was whether, if a car had been used, the Prime Minister would have arrived on time. The question was not about what the security issues were. That deserves to be answered.

Hon BILL ENGLISH: It is not the custom of this Prime Minister, or any other, to give any indication of the time or whereabouts of meetings he has that are related to matters of national security, and he is not going to start doing so now.

Hon Trevor Mallard: I raise a point of order, Mr Speaker. I ask you to reflect on that answer, given the widespread publicity yesterday of the Prime Minister indicating he had a security meeting in Auckland on the day in question. That answer just cannot be true.

Mr SPEAKER: That last point is not the issue. The issue is simply that the question was asked not about the nature of the security meeting but simply whether the Prime Minister would have arrived in time for the meeting, whatever the meeting was, if a motor vehicle had been used. We still have not heard that answer. It may not be in the public interest to answer that; I am not sure. But we certainly have not heard an answer to that question.

Hon Trevor Mallard: Without discussing the tail on the end of my previous point of order, yesterday on TV3 the Prime Minister indicated he had—

Mr SPEAKER: No, no. The member is now debating the issue. I have done what I can to get the question answered. The Minister has indicated on behalf of the Prime Minister that he believes that it is not in the public interest to answer the question asked. I have to accept that. Members can make their judgment about that, and there are further supplementary questions available to dig into that. The Hon Pete Hodgson has that right.

Mr SPEAKER: He did at the end. The last past of his answer was that he considered it not to be in the public interest to answer that specific question.

Mr SPEAKER: A point of order, the Hon Clayton Cosgrove. I am struggling to understand what it is, though.

Hon Clayton Cosgrove: I will enlighten you.

Mr SPEAKER: I will be enlightened.

Hon Clayton Cosgrove: In making your judgment you have extensive powers and you can ask the Minister—as you have twice, I think—to adhere to the Standing Orders and answer a question. I simply pose the question of how it is not in the national interest to confirm the Prime Minister’s arrival time.

Hon BILL ENGLISH: Yesterday the Prime Minister gave a general indication of the type of meeting and no further details. It is not his plan—any more than it has been the custom of any other Prime Minister—to release details on those matters.

Hon Trevor Mallard: Would the Prime Minister have arrived on time to the security meeting he outlined yesterday if he had taken a car?

Hon Trevor Mallard: I raise a point of order, Mr Speaker. You have advised us to use tight and direct questions, and you have indicated previously that you thought the Minister had not answered the question.

Hon BILL ENGLISH: I believe that it is not in the public interest to provide those details.

27 comments on “Gower on Chopper Key ”