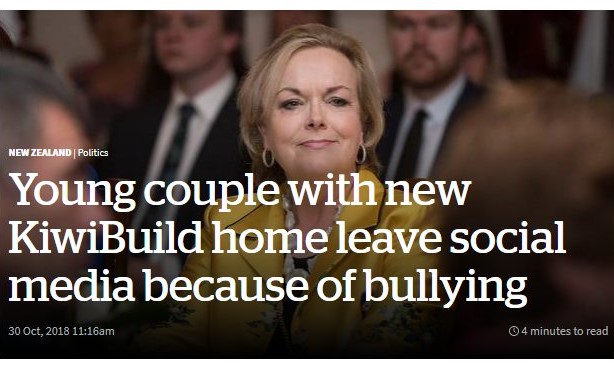 In its enthusiasm to try and embarrass Labour and divert attention from the personal difficulties of different MPs National has unfortunately reverted to type.  Dirty politics type.

Then in true National Party mode she tried to blame Labour:

I agree. Good for them. It’s Phil’s Fail not theirs’. Not sure this is what people meant when they thought KiwIBuild would deliver homes for the homeless https://t.co/bKQoYvZVtW

And she thought she would go on the offensive.

Just the sort of lie I’d expect from Phil Twyford. At no stage have I ‘gone on Facebook & trolled the personal pages’ of anyone. Good on the young couple for taking an opportunity afforded by an enthusiastic but incompetent minister who never worries about detail. https://t.co/MTnPdEYQPt

There is no proof as far as I can tell that she went onto the facebook pages of the Kiwibuild home purchasing couple.

But she used her publicity power to identify and embarrass the couple involved and publish information I am sure they did not want to be put into the public arena.  She ought to know that her supporters are the type to not hold back in criticising and attacking others, even the innocent.

And the couple concerned have taken down their social media profiles as a result of the attention.  From the Herald:

[Phil] Twyford said this morning that Collins’ post was “essentially inciting victimisation of a young couple who have just bought their first home”.

“They didn’t sign up for that. They feel bullied because of Judith Collins’ actions. And I think her actions show the toxic culture in the National Party that Simon Bridges has failed to do anything about.”

He said the couple had felt so bullied that they had taken their social media profiles offline.

The Greens chose to use some of their Parliamentary questions today to express their disgust with her actions (at 7:12).

Simon Bridges is not handling the matter well.  But I am sure that one of his main challengers has shown how unlikeable she is.

And there was this interesting tweet involving a subject well outside of her responsibilities. Judith clearly is happy to cultivate the vote of those less tolerant of ethnic diversity.

Words fail me.. Young woman caned in public under Sharia law for being close to her boyfriend in Indonesia https://t.co/cCM5G1Z5tH

National used to be so good at this sort of thing.  Long may their ill discipline last.