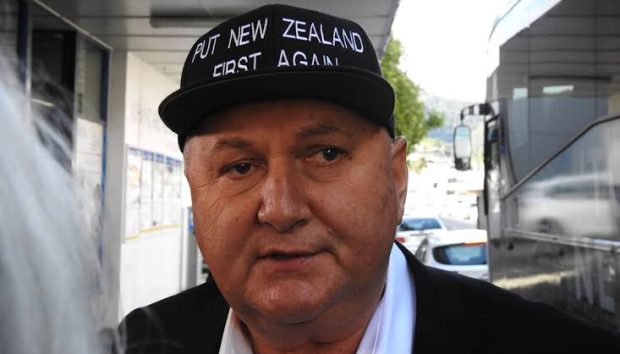 Changes in Immigration policy has meant that the partners of Kiwis who have entered into arranged marriages were finding it more and more difficult to come to New Zealand.

This caused considerable consternation among the Indian community who was particularly affected at the delays that were caused and the rapid decline in approvals being granted.

Shane Jones then went full Trumpian, got out the flamethrower and gave everyone a good spray.  From Jo Moir at Radio New Zealand:

… [S]enior New Zealand First MP and Cabinet minister Shane Jones told RNZ he was saddened by the “levels of verbiage that the Indian communal leadership have thrown at the party”.

“I would just say to the activists from the Indian community, tame down your rhetoric, you have no legitimate expectations in my view to bring your whole village to New Zealand and if you don’t like it and you’re threatening to go home – catch the next flight home.”

Peters had a spray as well.

Party leader and Deputy Prime Minister Winston Peters was happy to take the credit for a tougher approach to partnership visas.

“Has New Zealand First had an influence on trying to tidy up the quality of information on which the immigration department relies? The answer is profoundly yes.”

It was simple, he said, you’re either a partner under New Zealand law, or you’re not.

And to make sure that no one missed the dog whistle Jones gave it another blow last Tuesday.  From Collette Devlin at Stuff:

New Zealand First MP Shane Jones is making no apology for his “racist” comments aimed at the Indian community and wants to see a tougher crackdown on immigration with a national population policy.

He told Stuff on Tuesday he was speaking on behalf of “battalions” of “ordinary Kiwis who were highly anxious” about population growth putting stress on state services and infrastructure.

Things became that ridiculous Simon Bridges accurately described Jones’ comments as distasteful and wrong.  I wonder how he feels about National’s belief that two Chinese candidates are worth more than two Indian candidates.

I am pleased that Jacinda Ardern has stepped in and required Immigration New Zealand to reverse the policy.  From Derek Cheng at the Herald:

Immigration NZ is to blame for the partnership visa rules that have upset the Indian community and those changes will be reversed, Prime Minister Jacinda Ardern says.

The issue has upset the Indian community, which says that the stricter interpretation of the rules – including for couples to have lived together for 12 months – meant that many spouses in arranged marriages did not qualify.

It led to a verbal stoush between the Indian community and New Zealand First MP Shane Jones, whose fiery comments including telling immigrants to leave the country if they did not like the rules.

The Indian community accused Jones of racism, which he strongly rejected – though he said he would continue to be vocal on immigration issues as it was fertile vote-winning ground for New Zealand First.

Immigration Minister Iain Lees-Galloway has said he would review the rules in light of the Indian community’s concerns, but Ardern went a step further today.

“That was changed as a result of Immigration NZ officials, changing the way they were operating,” Ardern said.

“They did not do that under the authority of Cabinet … it was a decision made arbitrarily by officials.

“My expectation is that will reverse back to the status quo and the way it was operating before.”

Well done Jacinda.  And if you need any reason to work for a Labour-Green coalition Government next year I think this is all that you need.