In the US, 6% of children have ADHD, 10% between ages 3 and 17 will have moderate to severe difficulties with emotions, concentration, behaviour or being able to get along with other people.

Adults don’t do much better – approximately 1 in 4 in both the UK and USA have a mental illness in any given year.  The UK spends over GBP400 million on anti-depressants each year, the US $100 billion on mental health treatments.

So where does this huge rise in poor mental health come from?  Why are we having such great difficulties with modern life?  Are some countries coping better? 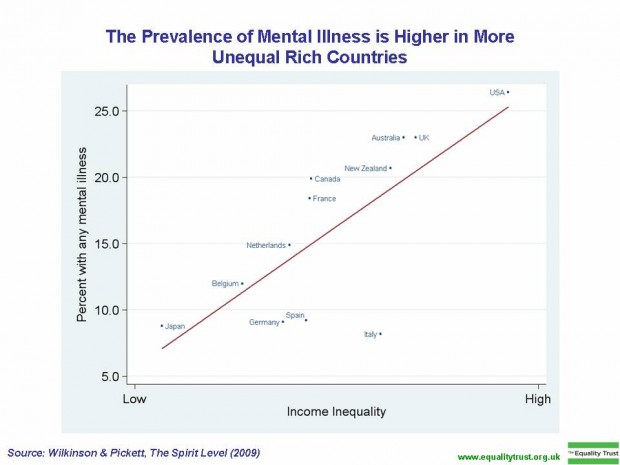 Yes – the more equal countries do better.  Psychologist and journalist Oliver James describes the ‘affluenza’ virus that attacks affluent countries – ‘a set of values which increase our vulnerability to emotional distress’.  These are values of acquiring money and possessions, the desire to look good in the eyes of others and to be famous.  They leave us with a great risk of depression, anxiety, substance abuse and disorder.  Philosopher Alain de Botton describes a similar condition as ‘status anxiety’, economist Robert Frank calls it ‘luxury fever’.  As the super-rich in an unequal society spend ever more on luxury goods, the desire stretches across society, leaving the rest of us struggling to compete.  Advertisers play on this, leaving us dissatisfied with what we have and addicted to income – working ever harder as we strive for the possessions we don’t need, to the detriment of relationships with friends and family, and on our quality of life.

Good relationships are important to mental health, and as we lose those our minds fray and we are more partial to illegal drugs.  Unequal societies have higher rates of substance abuse of all sorts (legal/illegal) as well. 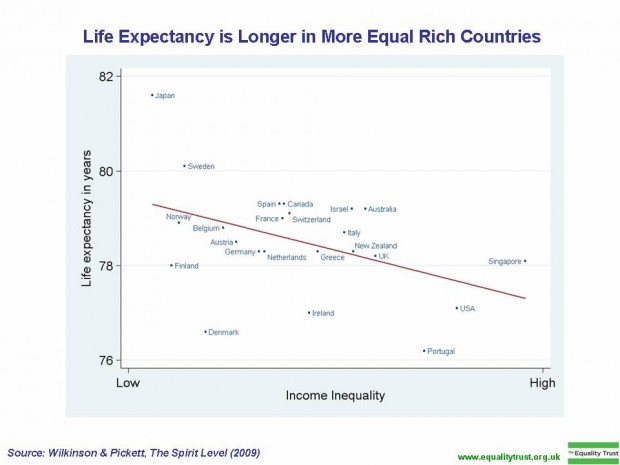 So mental health is worse – what about physical?  Unequal societies do no better here either.  Average income or health expenditure share no correlation with life expectancy.  But inequality in society leads to all its citizens leading live shorter lives, having higher infant mortality, and higher rates of obesity.  They do have lower suicide rates however, in the one social indicator that runs contrary to inequality. 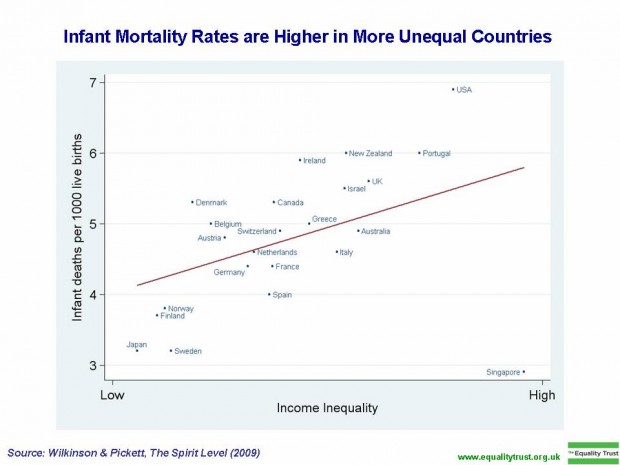 And the differences cut right across society.  More highly educated people have lower rates of most diseases.  But those with the highest level of education in the US have worse rates of heart disease, diabetes and hypertension than those with the least education in the UK.  In turn those in the UK from the highest social class still have higher death rates amongst working age men than any social class in Sweden.  The chance of a child dying are higher for the wealthiest people in Britain than for the poorest social group in Sweden.  Inequality kills the wealthy as well as the poor.

Across time periods you can see the changes inequality can make to a society.  During the twentieth century Britain, along with the western world, saw a great rise in life expectancy.  But the decades that experienced the greatest rise in life expectancy (between 6 and 7 years) were the decades that contained a world war.  In no other decade was there an increase of life expectancy of more than 4 years.  Material living standards fell during both wars, and whilst rationing gave an improvement in nutrition in WW2, that wasn’t true for WW1.  But the war periods were characterised by full employment and a much narrower income difference as the government made sure that everyone pulled together for the war.  In WW2 working class incomes rose 9% and the middle classes saw their income fall 7% – relative poverty halved (and crime rates fell).

The ever increasing rat race inequality breeds causes us much stress, and there are good physiological reasons stress causes us ill health.  Stress is designed to be acute, as part of the fight or flight mechanism – chronic stress wears the body down.  Where the immune system is heightened short term ready for injury it works; long-term it fails to respond to anything.  Increased heart pressure helps us run or fight in the short term; long term it causes heart disease.  An alert brain will respond fast in a high pressure situation; long term the chemical imbalance leads to memory loss and depression.  And so on through digestion and reproductive suppression etc.

The stress inequality causes is killing us all, physically and mentally.

Next Friday: Inequality and crime.